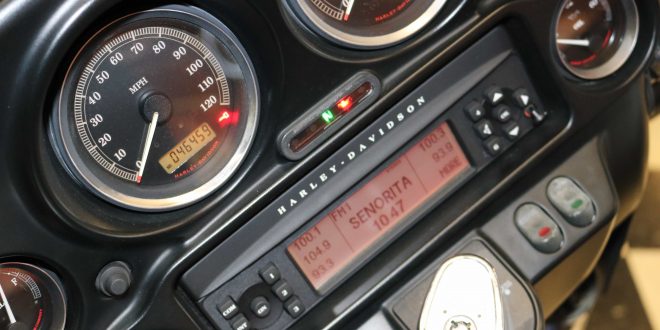 Hill Country: No Music For Arlo

Are you one of those people who can handle two or three things at a time?

My fiancee is one of those people. She could be backing up my truck with two whining grandkids in the back seat and with the radio blasting while her daughter is telling her about a rough day at work at the top of her lungs directly into her right ear without a glitch.

Me? I’d slam on the brakes, tell everyone to quiet down, turn off the radio, and proceed to back the thing up in silence. My simple mind can only handle one thing at a time and I don’t care if anyone thinks I’m stupid or not.

I tried listening to a small transistor radio while riding my first motorcycle. The unshielded ignition made it impossible. In later years, I had a motorcycle with a shielded ignition, so I tried it again. While in truth it was distracting, the only word I could think of at the time was “annoying.” It was a fail as far as I could see.

That’s why I have never owned a motorcycle affixed with a radio, CB, GPS, or digital music system of any kind. I have never used a communication system, either. You know, the person-to-person kind that allows you to communicate with your passenger or the more sophisticated type that supports communication between motorcycles. My position on these devices for motorcycles is unpopular, archaic, regressive, backward, however you’d like to characterize it.

I’m not going to advocate against any of that stuff. I won’t tell you that you shouldn’t have any of it. I’m saying that it does not work for me and I don’t like any of it.

I’ve owned a Honda Gold Wing and a Harley Electra Glide among a bunch of other motorcycles. Those two models seem to be the ones that are most heavily festooned with gadgets. The first thing I did with the Gold Wing was to remove the radio/CB unit.

The Electra Glide was a Standard and did not have any electronics. I enjoyed both of those motorcycles. Any communicating between bikes or between rider and passenger was easily handled with hand signals, facial expressions, or good old yelling at the top of our lungs. Same methods I use to this very day. I like to stop every so often on a ride and talk to folks face-to-face. That’s one of the best parts of motorcycling.

My simple little brain cannot handle too much input while in motion. The input that I am receiving is more than enough. I’m monitoring speed, road surface, traffic, surrounding environment like birds, animals, pedestrians, objects being propelled in the air by wind, objects falling out of trucks, objects coming out from under trucks, etc.

The added complexity of changing channels, tracks, stations, bass, treble, balance, volume, or constantly checking the GPS or listening to the voice direction interruptions of the GPS over the baseline audio is more than I want to deal with.

Add in the chatter of the riders around you or the passenger behind you and you’ve got too much for a simple mind. I ride better without clutter.

Even though the riding season is winding down, this is often the time of year when those folks considering a new bike start looking. Do you want a motorcycle with all sorts of electronics on it or not?

Again, I’m not advocating one way or the other, but I would like to put in a good word for knowing yourself. If you are the kind of person that can handle multiple streams of information coming at you all at once in traffic while on a conveyance that leaves you exposed, then fine.

If you know your limitations and aren’t afraid to admit them, shop accordingly. I’m just one of those people who doesn’t need music or electronic communications equipment while riding a motorcycle; wait, let me amend that. Instead of “doesn’t need” let me say “can’t handle.” After all, I possess a rather simple mind and I’m not afraid to admit it.