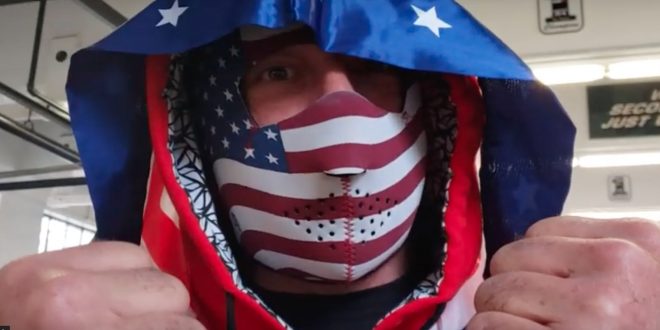 Another Vigilante Video From Ken Kaplan

In a new video posted Tuesday on the museum’s YouTube channel, Ken Kaplan offers a new warning to “dirtbag bike thieves” that vigilante justice will come to pass if some recently stolen bikes are not returned.

“We’re coming for you, little buddy, and it ain’t going to be pretty,” threatens Kaplan, brandishing two clenched fists. He’s dressed in his well-known “superhero” persona of “Kaplan America.” This time he’s wearing a mask that resembles a United States flag and a red, white and blue boxing robe.

Later in the video, Kaplan dons boxing gloves and proceeds to pummel a dummy that has been set up in the office/showroom of the museum. He then picks up a baseball bat and repeatedly strikes the dummy atop the ahead.

“That’s what you’re going to get. Give up the bikes,” Kaplan declares in the video that is titled “MESSAGE TO THE BIKE THIEVES, WE ARE COMING, THE DRAGNET TIGHTENS!”

In a separate post Tuesday on Facebook, Kaplan states that nine motorcycles have been taken from four families in recent days in eastern Connecticut and says he’s posted a $3,000 reward “to bring the thieves to justice.”

Kaplan asks Facebook readers to “help send these dirtbags to prison before they end up in a body bag. You will get cash and be doing them a favor” – the inference being that he’ll hunt down the thieves himself and slaughter them.

Kaplan’s outlandish video comes almost a year after he posted another over-the-top video titled “BEWARE BIKE THIEVES” in which he announced the formation of a posse to take on bike thieves. RIDE-CT & RIDE-NewEngland reported on that video here.

In that video, Kaplan and posse members brandish shotguns and other weapons. He proclaims, “Motorcycle thieves, your reign of terror is now over. There’s now a bounty on your head.”

He’s later shown swinging a broomstick. “If you’e lucky, the cops will get you first,” he says.

Bud Wilkinson writes the "RIDE-CT" motorcycle column and the "My Ride" classic car feature in the "Republican-American" newspaper in Waterbury, CT. A prep school graduate of Vermont Academy, he received a B.A. degree journalism from Ohio Wesleyan University in 1975. He is the recipient of a Scripps Howard Foundation National Journalism Award in 1992 and a 1991-92 regional Emmy Award for commentary. He currently rides a 1987 BMW R 80 RT and a 2014 Triumph Bonneville.
Previous Indian Introduces Challenger Line For 2020
Next IMS Attractions Aim To Create New Riders