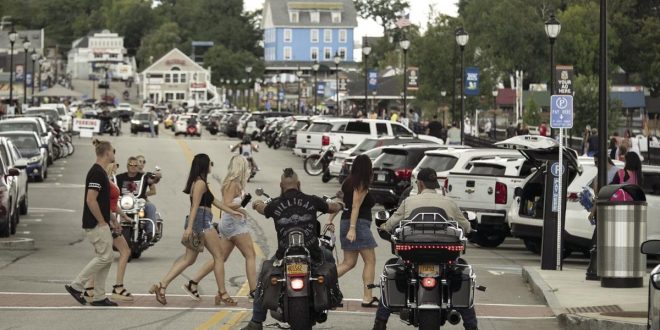 Photo by Karen Bobotas/Courtesy of The Laconia Daily Sun

Laconia Motorcycle Week Different From The Past

Laconia Motorcycle Week in New Hampshire is underway and “The Laconia Daily Sun” has a report on how it’s going:

LACONIA — Weirs Beach was bustling Saturday, the first day of Laconia Motorcycle Week, but it did not look like other bike weeks.

Along Lakeside Avenue, as many parking spaces were taken up by regular motor vehicles as bikes. There were signs affixed to streetlight posts up and down the boardwalk urging people to wear masks and observe social distancing. Meanwhile, a few hundred people were down at the beach enjoying the water and the sun, seemingly uninterested in the activity along The Weir’s main drag.

For some motorcyclists, the diverse crowd was a letdown.

“There are too many cars, too many trucks,” lamented Marrillee Arsenault of East Hampstead, who said she has been coming to Motorcycle Week for more than 30 years.

Though not disappointed by the feel of this year’s rally, Billy Eaton of Seabrook said he noticed many more family groups than one would usually see during a typical Motorcycle Week.

Jill Koppers of Thetford, Vermont, said she, along with her husband and school-age daughter, decided to spend some time enjoying the view of Lake Winnipesaukee from the boardwalk after spending some time at Funspot before heading back home.

“At least they’re having it,” said Stacey Brann, who with her husband, Micky, had traveled by motorcycle from their home in Randolph, Maine. The couple said they planned to spend the entire week biking around different parts of the state and taking in the sights.

The Laconia Motorcycle Week Association, which promotes the nine-day event has been stressing recently that motorcycle rides are an ideal COVID-safe activity — where people can easily practice social-distancing in the fresh air.

Earlier in the day 90 bikers took part in the 14th annual Peter Makris Memorial Run. The event succeeded in raising $32,000 for several charities, including the Laconia Fire Department’s Life Saving Fund. Though the turnout was smaller than in recent years when the charity ride attracted between 200 and 300 riders, Cynthia Makris was pleased with the participation.

“Everyone thanked me for not canceling it this year,” she said Monday.

A ride to raise money for animal shelters attracted 100 riders Monday, according to Charlie St. Clair, executive director of the Motorcycle Week Association.

On Saturday afternoon, St. Clair sat behind the association’s Rally Headquarters booth where people were buying T-shirts and other Motorcycle Week souvenirs and paraphernalia.

“It’s been a good, strong day,” St. Clair said. “There are lots of motorcyclists around.”

Jack Hanley, who runs Top Beachwear on the Pier, said business at his shop was good.

“We’re lucky to be doing what we’re doing,” he said.

Police Chief Matt Canfield on Monday said it was a quiet weekend for his department.

He said police made four DWI arrests, but none involved motorcyclists. He also said there were no problems at any of the bars in Weirs Beach, other than what he said was one minor complaint about the use of face masks.

“We were confident that we were (going to see) a normal summer weekend kind of crowd.” Canfield said. “What drove the smaller turnout was the lack of vendors, live bands and beer tents.”

This year the city decided not to issue permits to such operations in an effort to keep crowds as a minimum during the coronavirus pandemic.

To check out “The Laconia Daily Sun,” click here.

Since 2010, RIDE-CT & RIDE-NewEngland has been reporting about motorcycling in New England and portions of New York.
Previous “Cookery” Book Coming Soon From Toymakers Cafe
Next Actor William Gillette Was A Daredevil On Motorcycles