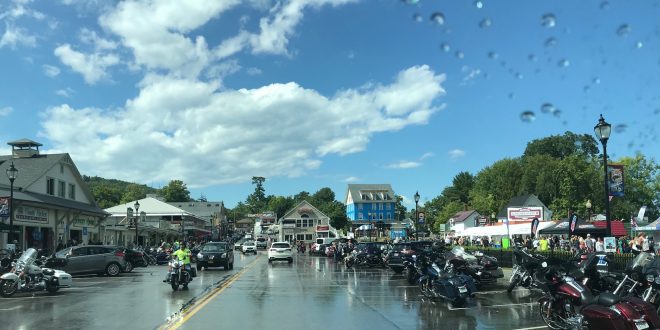 Laconia Proved To Be OK “All Things Considered”

Laconia Motorcycle Week in New Hampshire concluded its run on Sunday and “The Laconia Daily Sun” has a wrap-up story:

LACONIA — When Laconia Motorcycle Week promoter Charlie St. Clair and City Manager Scott Myers were asked to give their assessment of the just-completed event, they began their remarks with the same phrase, “All things considered.”

There was a lot to consider about this year’s rally, which occurred in the midst of the coronavirus pandemic.

In the hope of eliminating crowding in the heart of Weirs Beach, the event’s traditional epicenter, outside vendors, outdoor entertainment, and so-called beer tents were banned. The Laconia Motorcycle Week Association, meanwhile, urged bikers to abide by COVID precautions and spend more time riding than partying.

“There was a significant reduction in the number of motorcycles,” Myers said Monday.

“It was a much smaller turnout,” he said. “We’re happy for what we had.”

“It was extremely quiet,” Police Matt Canfield said. He said there were no arrests related to the rally, and no serious motorcycle accidents in the city, though there was a fatal crash in Gilford early Friday that killed two riders.

And while there was stepped-up liquor enforcement during the week, Canfield said there were no issues with the bars in Weirs Beach.

“There were no vendors and beer tents. It was just like normal summer traffic,” he said.

Typically the turnout on the final Saturday of the nine-day rally is the largest, but heavy rain on Saturday kept the numbers way down.

At midday, the sidewalks along Lakeside Avenue were mostly empty. At the rally headquarters tent on the boardwalk, Motorcycle Week souvenirs were covered with sheets of plastic to protect the merchandise from the rain.

Some of the bikers who showed up on Saturday chose four-wheel transportation.

“I’ve got about $80,000 invested in my bike,” Jay Procopio of Woburn, Massachusetts, said. “I wouldn’t take it out in this weather.” Procopio, who tries to come to Motorcycle Week every year, was hoping to meet up with friends but worried they might have decided to cancel because of the weather.

This was Norm Lussier’s first trip to the annual rally in 15 years. His plan was to ride his bike from Millbury, Massachusetts, but when he woke up and saw the rain he decided to take his truck instead.

Meanwhile, Jaqui Wright and Jason Rogers, pulled up on their motorcycles across the street from the Tower Hill Tavern. The two had arrived from upstate New York the night before.

Although it was still sprinkling, they were undeterred.

“We’re not afraid of the rain,” Rogers said.

St. Clair and Myers agreed the crowds in Weirs Beach during the last week were typical for this time of year.

“It was no different than other summer weekends,” Myers said. “The crowds were good, but not oversized.”

He said the decision not to issue vendor licenses this year was the right one because it prevented large groups from gathering outside.

With less to do in Weirs Beach, St. Clair said bikers spent much of their time riding around the state. Some motorcyclists told him they logged about 150 miles a day taking in the sights from the White Mountains to the Seacoast.

His one regret was that there were so many people who opposed holding the rally at all, believing it would cause a major increase in coronavirus cases.

“I wish there was a way to explain that visitors that came this past week were no different than those who came earlier this summer,” he said.

Since 2010, RIDE-CT & RIDE-NewEngland has been reporting about motorcycling in New England and portions of New York.
Previous OMG, An Actual Show Staged By Eagle Riders In Connecticut
Next COVID-19 Death Traced To Sturgis Motorcycle Rally