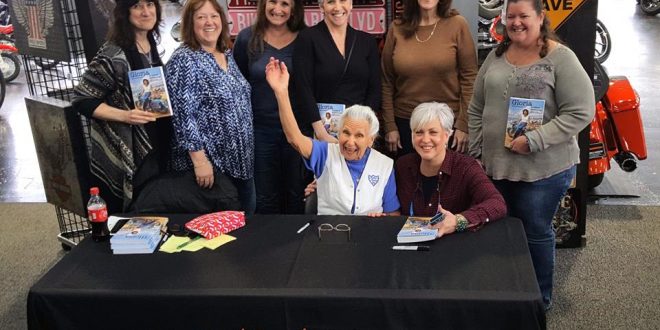 March 12, 2018 Comments Off on Lifelong Ride For Gloria Tramontin Struck

CLIFTON, NJ – It was the near the end of a 20-minute phone conversation last week about her new autobiography that Gloria Tramontin Struck paused for a moment to reflect on her life. “If my brother had taken ‘No’ for an answer, my life would have been so different. So sad, so sad if I didn’t ride,” said the 92-year-old member of the AMA Motorcycle Hall

Struck’s new book is titled “Gloria – A Lifetime Motorcyclist: 75 Years on Two Wheels and Still Riding.” It recounts how she took up riding in 1941 at age 16 and details her adventures while putting nearly 700,000 miles on 14 different motorcycles, including 16 trips to the Sturgis Motorcycle Rally in South Dakota and visits to Marcus Dairy in Danbury. 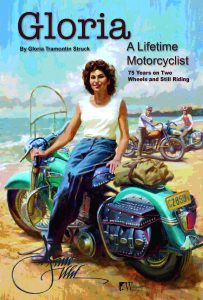 “I finally finished it. Between you and me, never again,” she said laughingly of becoming a first-time author. “It was quite an experience. I learned a lot. At my age, I’m still learning. It brought back so many memories, because most of this book was written by memory. It was something I always wanted to do for my family; never really for everyone.”

Struck was seemingly destined to ride motorcycles. Her father opened a motorcycle and bicycle shop in Clifton, N.J. – where she still lives – in 1915. The shop sold Excelsior and Henderson motorcycles. In 1928 when she was three years old, her father was hit by a car and died several days later. Her mother then ran the business and sold Indians in the 1930s and 1940s before retiring in 1947. Her brother took over the operation and became a Harley-Davidson dealer.

It was in 1941, though, that her older brother, Arthur, cornered her one day. She still remembers that first ride. “How could I forget? I never wanted to ride a motorcycle,” she said, recalling that her lone experience on two wheels up until that moment was riding pillion around the block with her brother when she was 10. “My brother said to me, ‘I’m going to teach you how to ride a motorcycle today.’ I just stamped my foot and I said, ‘No, you’re not, because I don’t want to ride a motorcycle and I’m not going to do it.’”

Her sweet-talking sibling prevailed, however, coaxing the reluctant teenager to try it and launching her life on two wheels. For the first few years, she borrowed bikes from the shop to ride, and didn’t secure a motorcycle of her own until 1944. “The first three bikes were Indians. Boy, I should have kept all of my old bikes, because today they’re worth a fortune,” she said.

Decades ago, seeing a woman on a motorcycle wasn’t as commonplace as it is today. When Struck rode to places like Daytona Bike Week and Sturgis, she wasn’t welcomed. “Women riders were not thought of very kindly. You were called names and I mean bad names,“ she said, adding that she was refused gas and lodging along the way because of her gender. “They thought you were trash. You just coped with it. It didn’t make any difference, you still continued to ride.”

Her particular passion is long-distance riding. She’s ridden all over the U.S. and beyond. In 1999 and 2001, while in her 70s, she tackled the Alps in Europe with her son, Glenn. Her goal now is to make it to 100 years old and ride cross-country one more time. “I always like to return to places I rode many, many years ago to see the difference. The little one-horse towns that turn into cities. I would like to retrace all my steps, all my riding,” she said.

Her age and her trailblazing experiences have helped Struck become a legend in the motorcycle world. How is she handling being a celebrity? “People tell me that but, you know something, I just feel like a little old lady named Gloria Struck who rides a motorcycle. It’s very humbling. It feels great, of course,” she said.

Because of her fame, her book is “selling itself,” she said, admitting to be a bit overwhelmed at the moment by what promoting it entails. On Saturday, she appeared at Tramontin Harley-Davidson/Honda in Hope, N.J. to sign copies and will return on April 8 after attending Daytona Bike Week.

If the dealership’s name sounds familiar, well… “The motorcycle business has been in our family for 103 years. It’s still in the family, still going,” said Struck, whose current mount is a 2004 Harley-Davidson Heritage Softail Classic.

“Gloria – A Lifetime Motorcyclist…” goes beyond riding. “I did not only write about my life as a motorcyclist but I also wrote some family history, which I felt was important. I lived during the Great Depression. People do not know that the Great Depression lasted from 1929 to 1940. It was a long time,” said Struck, who worked in a Bendix Aviation plant during World War II.

“I thought some of those things might be interesting, because today, sadly, I don’t think the schools teach history. I have so, so many stories of my 75 years of meeting people and riding. I never realized how much I lived life until I started writing about it.”

If Struck is an inspiration to younger riders, and that just about covers every rider, she is likewise bolstered by the rest of us who ride motorcycles. “They inspire me. I feel like they’re an inspiration to me to keep on going, I guess, and I’m thankful for all the people I have met throughout the years. I’ll tell you, motorcyclists are the best. Motorcyclists I have found to be the most caring, the most giving and the most patriots of any people. I’m very blessed to have lived this kind of life.”

And it’s all because her brother wouldn’t take “No” for an answer. “A number of years back, I thanked my brother,” she said. “I said, ‘You know, I have had the most interesting and adventurous life’ and I thanked him for it.” 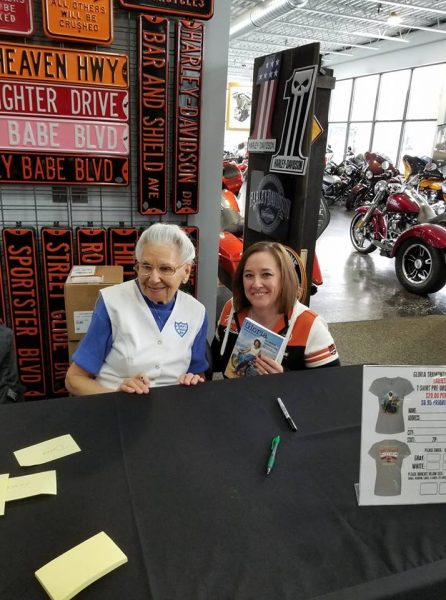 (Originally published in the “Republican-American” on March 10, 2018.)

Since 2010, RIDE-CT & RIDE-NewEngland has been reporting about motorcycling in New England and portions of New York.
Previous Indian Gets Designer Stenegärd From BMW
Next Indian Plans Apparel Store At MGM Springfield