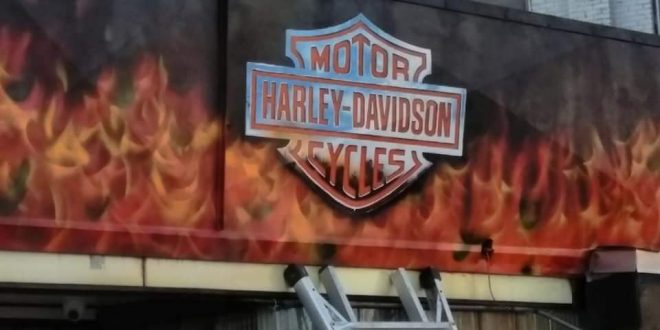 WORCESTER, MA – A hand-painted mural that adorns an air conditioning duct atop the entrance to the Miss Worcester Diner here and featuring Harley-Davidson’s famous bar and shield logo has come to the attention of the motocycle company in Milwaukee, which has asked that it be removed.

Miss Worcester Diner owner Kim Kniskern received a cease and desist letter from Harley-Davidson on Thursday, which asked that she “remove the Harley-Davidson Mark from the exterior of your business.”

The letter from the company’s Jesse Johnson stated, “While Harley-Davidson appreciates your enthusiasm for the brand, I hope you can understand that we must be diligent in protecting our trademark rights, including the policing of unauthorized use.”

The mural, which has Harley-Davidson’s logo resting on a bed of flames, was painted by local artist Tony Freitas. Kniskern told the “Telegram” newspaper that the sign has been up for at least three years and that it honors the riding culture in the diner’s customers.

“We all ride. There’s always bikes in front of the diner. We’re one big riding family,” Kniskern told the newspaper.

Harley-Davidson learned from the mural’s existence from a tipster whose identity hasn’t been revealed. “I’m more pissed at the person who took the picture and emailed it to the corporate office. I mean, who does that?” Kniskern said.

Harley-Davidson is standing firm in its resolve that the mural be obliterated.

“Given the popularity and strength of the Harley-Davidson brand, we often run into enthusiasts such as yourself who utilize our Marks in their commercial endeavors, however, by using our trademark on the exterior, public facing portion of your business, you have created the impression that there is an affiliation or other relationship with Harley-Davidson when no such relationship exists,” stated Johnson’s cease and desist letter to Kniskern.

“While I do not believe that any wrongdoing was purposeful, if we were to allow this type of use to continue, we would risk losing the value of our trademarks, and we want the Harley-Davidson brand to remain strong for years to come.”

Harley-Davidson’s missive to the Miss Worcester Diner is receiving a great deal of media attention, and the Worcester Heritage Society has started an online petition in support of Kniskern and the mural. The petition asks that Harley-Davidson reconsider its position.

The Worcester Heritage Society notes in the petition, “People come from all around to take pictures in front of this Worcester treasure with the ‘already iconic’ and much loved flaming HD sign.”

It also says, “HD doesn’t realize the value of this type of historical promotion of love – love for Worcester – love for the Miss Worcester Diner, and love for motorcycles made by Harley-Davidson since 1903. This is for and in tribute to them.”

The Miss Worcester Diner is located at 300 Southbridge St. in Worcester.

An award-winning print and broadcast journalist, Bud Wilkinson writes the "RIDE-CT" motorcycle column and the "My Ride" vintage car feature for the "Republican-American" newspaper in Waterbury, CT. He studied journalism at Ohio Wesleyan University where he received a B.A. degree. He currently rides a 1987 BMW R 80 RT and a 2014 Triumph Bonneville.
Previous Future of Norton Grim, Company Enters Administration
Next Diner Plans To Fight Harley-Davidson Edict