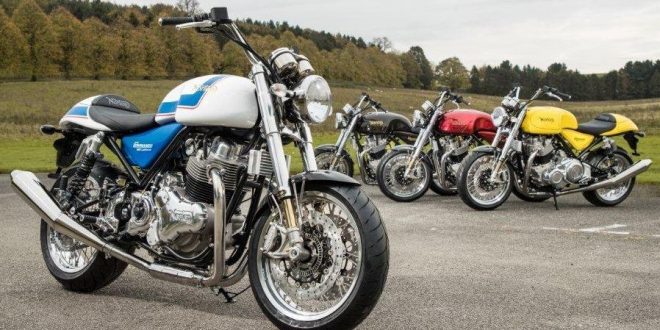 CHENNAI, INDIA – The Norton motorcycle brand has been saved from the dust bin. TVS Motor Company announced today that it has spent £16 million in cash, signed an asset purchase agreement, and acquired the Norton name and other assets of the bankrupt British motorcycle manufacturer.

“This is a momentous time for us at TVS Motor Company. Norton is an iconic British brand celebrated across the world, and presents us with an immense opportunity to scale globally,” TVS Motor Company Joint Managing Director Sudarshan Venu said in a press release announcing the purchase.

“This transaction is in line with our effort to cater to the aspirations of discerning motorcycle customers. We will extend our full support for Norton to regain its full glory in the international motorcycle landscape.”

TVS Motor Company produces a variety of scooters, mopeds, three-wheelers and 100cc, 110cc, 160cc and 310cc motorcycles, including BMW’s G310R and G310GS models. It sells more than three million units a year and has revenue of more than $2.9 billion.

Norton has been in administration since late January after being unable to cover £300,000 in unpaid taxes. The British website MCN reports that Norton listed total debts of more than £14 million.

Originally found in Birmingham, England in 1898, Norton was bought by bike lover and entrepreneur Stuart Garner in 2008. Garner set about to restore the brand’s name, designing smart looking retro models but failing to develop a substantial dealer network or efficient production line.

“Norton will continue to retain its distinctive identity with dedicated and specific business plans,” said Venu. “TVS Motor will work closely with customers and employees in building the success and pre-eminence of the Norton Motorcycles brand and we look forward to growing together globally in the years to come.”

MCN quotes the joint administrator involved with Norton, Lee Causer, as saying, “In challenging circumstances, we have been able to secure the future of the Norton brand. We are delighted that the sale to TVS Motor Company will protect jobs and provide a highly beneficial outcome to creditors.”

Among the pressing concerns for new ownership is placating Norton lovers who have ordered bikes – notably 466 customers who put down deposits – and never had their orders filled.

Since 2010, RIDE-CT & RIDE-NewEngland has been reporting about motorcycling in New England and portions of New York.
Previous Harry’s Place Reopens, Motorcycle Ban Lifted
Next British Shows Shelved Because Of Pandemic