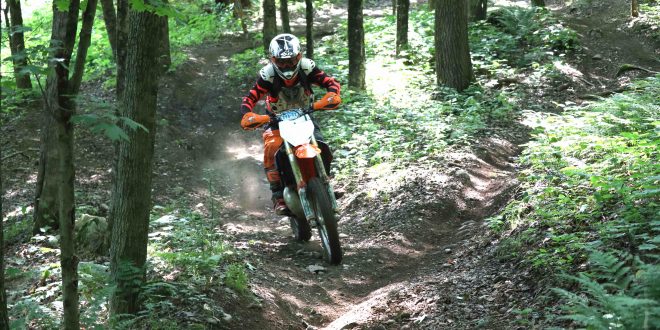 Opinion: Riders Should Have Dibs On Thomaston Dam

It’s an ambitious plan. Build an uninterrupted 44-mile “greenway” alongside the Naugatuck River from Torrington to Derby for use by walkers, joggers, bicyclists and their pets. A few segments have been completed, while work and planning continues on the remainder, according to a status report on the project’s website.

Of most concern to a passionate portion of the motorcycle riding community is a segment above the Thomaston Dam in Thomaston and stretching north into Litchfield. Land there has been dedicated for trail riding since 1975 and as many as 40,000 dirt bike enthusiasts use it annually.

Much of the land belongs to the U.S. Army Corps of Engineers, which oversees the trail system on the west side of the river. The remainder in Litchfield stretches to about three-quarters of a mile north of the Campville Road bridge below Exit 41 on Route 8. The Pathfinders Motorcycle Club maintains the trail system, which is configured in a meandering 13-mile, one-way loop for rider safety.

Riding Area Is An Oasis

Two recent visits revealed the area to be more remote and disconnected from the surrounding area than I had imagined – that is, far away from residences. The trail system is a riding oasis that provides a varied and often challenging experience. Knobby tire tracks reveal constant use.

What makes the area sacrosanct is that it’s the only legal area in the state that is open to trail riders. There’s nowhere else. It is a highly valued and irreplaceable recreational asset that attracts riders from across the state and beyond. The Naugatuck Valley Greenway threatens its status.

Back in late February, upwards of 150 vocal off-road riders showed up in Thomaston for an informational meeting put on by greenway planners. Potential routes for the Naugatuck River Greenway were shown during the sometimes contentious meeting. Two proposed routes go through the riding area. A third route on the east side of the river in Harwinton would present no conflict with riders.

Tony Gasper, president of the New England Trail Riders Association, told planners that any west-side encroachment by the greenway “would cripple the trail system” and that it’s “not practical or safe for us to share” the parcel with strollers.

NETRA’s position hasn’t changed. It’s neither realistic for a rider focused on navigating a steep, muddy or treacherous trail to have to worry about adventuresome/inattentive walkers or bicyclists who might have strayed off the greenway nor safe to have the trail and greenway cross or share a right-of-way at any point along the way.

Mixing pedestrians and dirt bikes would be downright dangerous. So why try it? And why must the greenway be uninterrupted? Aesthetics? Ego?

The purposes of the Naugatuck Valley Greenway are to “provide a non-motorized transportation option, support tourism and economic development, and improve the health and quality of life for residents,” the website states.

Doesn’t the existing trail riding area already “improve the health and quality of life for residents” and others, albeit for those using motorized transportation?

Not being a trail rider, I never considered the trail riders’ plight until I attended the February meeting. Some riders were outraged at the possibility of the area being usurped or shared. Having now surveyed the area from bottom to top and witnessed the trail system in use, I can appreciate their passion and concur with their unwillingness to relent for reasons of safety and enjoyment. To mix dirt bikes and foot track is lunatic thinking.

A Gap In Greenway Is The Solution

So what’s the solution? What if the U.S. Army Corps of Engineers and Litchfield simply opt out of the greenway? Participation by governing bodies along the route is voluntary. Saying to the dirt riders who have used the area for 44 years that they legitimately have “first dibs” and that the greenway can, ahem, “Take a hike!” would immediately end their worries.

Or what if Litchfield only partially participated? The town could effectively “grandfather” the trial riding area and only build its portion of the greenway southward from the Torrington line until it reaches the top of the trail loop.

What about the proposed east-side route in Harwinton? As some riders who travel up from New York and New Jersey might say, “Fuhgeddaboudit.” Building the southern portion of that route has two seemingly insurmountable hurdles: it would require traversing private property and is prohibitively expensive.

What property owner would want or allow foot traffic literally in their back yard? And who would pay for the necessary excavation, a costly undertaking that would require the removal of rock and ledge?

A greenway may substantially benefit urban areas, but the same doesn’t hold for places like Litchfield and Harwinton where expansive outdoor recreation options already exist.

Neither town will see a boost in tourism and economic development because the proposed greenway paths are miles away from the towns’ cores. For Litchfield and Harwinton the greenway is an unnecessary and unfunded boondoggle, although the construction would likely be partially covered by grants.

And what about the extended costs to the towns for maintenance in perpetuity or repairs in the wake of flooding?

A meeting involving the towns and interested parties is now set for Aug 7 and the consultant hired to devise route options is expected to make a recommendation. Here’s an alternative suggestion: pick the east-side route. Harwinton can then quietly decline to pursue the greenway for the previously stated reasons.

While it may be “detrimental to the concept” to have an interrupted greenway, as one involved party suggested to me this week, it would be a much greater detriment to abandon or damage the trail riding community by eliminating or intruding into such an established, treasured, active and one-of-a-kind recreation area.

How about a 40-mile greenway with a bit of a gap?

(To learn about the effort to stop the greenway from going through the trail system, visit the website We Ride The Dam.)

(A version of this column appeared in the “Republican-American” newspaper on July 13, 2019.)

An award-winning print and broadcast journalist, Bud Wilkinson writes the "RIDE-CT" motorcycle column and the "My Ride" vintage car feature for the "Republican-American" newspaper in Waterbury, CT. He studied journalism at Ohio Wesleyan University where he received a B.A. degree. He currently rides a 1987 BMW R 80 RT and a 2014 Triumph Bonneville.
Previous Cost For Cops Puts End To Elm City Motorcycle Mania
Next Hill Country: Getting Back In The Saddle