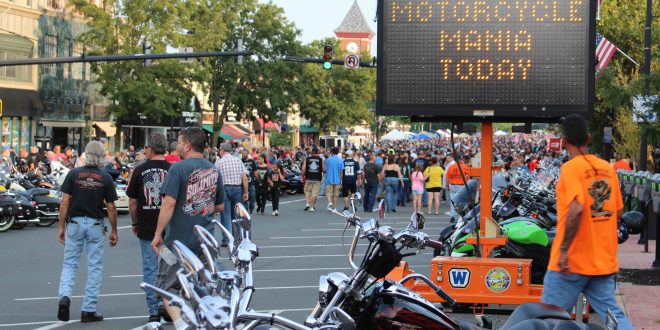 NEW HAVEN, CT – With only a month to go until showtime, Elm City Motorcycle Mania has been abruptly canceled.

Organizer Rich Greco said today that he received a phone call Thursday night telling him that a revised requirement by New Haven that 60 officers be on hand for the event scheduled for Saturday, Aug. 17 made the cost of police protection prohibitive for the city.

Plans for Elm City Motorcycle Mania, which was set to be staged downtown on Temple Street and the green, were announced in May. The event was viewed as a replacement for the long-running Middletown Motorcycle Mania.

“Everything seemed to be going fine. I got all my sponsors ready pretty much; vendors booking and paying their fees,” Greco said. “They up and cancel me. I’m not a happy camper.”

Greco reported that the city initially said upwards of 12 officers would be sufficient to ensure a safe event, but inexplicably quintupled the number.

Greco had lined up Libby’s Motoworld and Toad’s Place in New Haven, Brookfield Indian Motorcycle in Brookfield, Haymond Law and Brothers’ Harley-Davidson in Branford as sponsors.

“They all get their money back. Thank goodness I’m not out much money,” said Greco, adding that his big loss is in the time already spent setting up Elm City Motorcycle Mania.

Would Have Benefitted Police

Elm City Motorcycle Mania was scheduled to run from 2 to 7 p.m. on Aug. 17. Donations would have benefitted the New Haven Boys and Girls Club and, ironically, the Police Athletic League.

Greco indicated he wasn’t totally surprised by the city’s pullout; that he recently “started getting funny vibes” when emails about the event sent to the city’s economic development department failed to get replies.

“I don’t know how long this has been going on in the background,” he said of New Haven’s decision to abandon the event.

Middletown Motorcycle Mania ran for 13 years in downtown Middletown, attracting between 15,000 and 17,000 riders last August, before the city pulled the plug in January. The reason given was the high cost of police security. Greco said the cost to the city was $10,500.

An award-winning print and broadcast journalist, Bud Wilkinson writes the "RIDE-CT" motorcycle column and the "My Ride" vintage car feature for the "Republican-American" newspaper in Waterbury, CT. He studied journalism at Ohio Wesleyan University where he received a B.A. degree. He currently rides a 1987 BMW R 80 RT and a 2014 Triumph Bonneville.
Previous Walkway Over the Hudson Will Open To Motorcycles
Next Opinion: Riders Should Have Dibs On Thomaston Dam