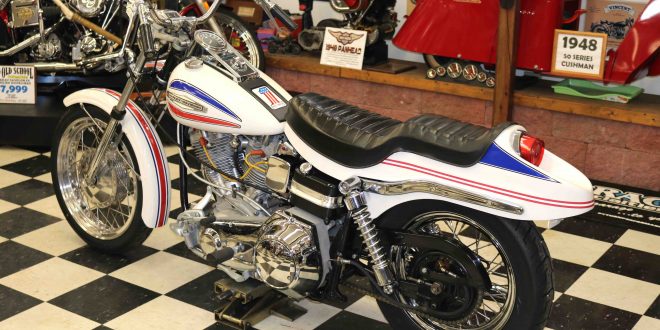 WATERBURY, CT – From a sales standpoint, Harley-Davidson’s 1971 FX Super Glide model was an unmitigated flop. It was such an ugly duckling that only 4,700 of the ‘boat-tail” model were sold. “It was so untraditional for Harley that people just wouldn’t accept it,” recalled Cosimo “Doc” D’Occhio last week.

D’Occhio, who founded Doc’s Motorcycle Parts in Waterbury a half-century ago, has been busy restoring a 1971 FX  Super Glide for the past two years; that is, when not at his getaway residence in Florida playing golf. He retired from the business five years ago and his son, Mike “Mike Doc” D’Occhio, took over.

“I always liked this bike for some reason. I started the business in ’69 and this came out in ’71 and everybody hated it,” said D’Occhio. “They quickly disappeared off the scene because of that fender; that rear section. People just threw them away as fast as they could. They’d come down to our store and buy a regular fender.”

It was roughly 40 years ago that a guy showed up at Doc’s while on the way to ditch some old motorcycle parts at the dump and asked D’Occhio if he wanted them instead. The reply was succinct: “No, we don’t deal in used parts.” D’Occhio then looked in the trunk of the man’s car and spied the distinctive rear tailpiece, along with the matching seat.

While the guy was willing to give them away, D’Occhio handed over $100. “I bought it for the sole purpose of putting it up on display, and it’s been up on display for, I’d say, 30 years. I said someday someone’s going to come in here and they’re going to have a ’71 FX , missing that fender, and I’m going to buy that bike,” he said.

And darned if D’Occhio wasn’t right. Eventually, maybe 20 years later, someone came in with “basket case” Super Glide. The numbers of the frame and engine matched. “I bought it from him and put it away and basically kind of forgot about it,” he said.

At least until his son pointed out that the business would celebrate its 50th anniversary in 2019 and that restoring the Super Glide to show off at its annual customer appreciation day and bike show in September might be a worthwhile endeavor.

D’Occhio got it assembled in time in time for the recent show, although it hasn’t been fired up yet and still needs a few parts. Nonetheless, it shows off what Harley-Davidson and its styling chief, Willie G. Davidson, were attempting to accomplish.

The “FX” stands for Factory Experimental and the model was Harley-Davidson’s first “factory custom.” Davidson melded the frame from an FL Electra Glide, and its 1,200cc Shovelhead engine, with the front end, buckhorn handlebar and small headlight from the XLCH Sportster model. The electric starter was deleted.

“Harley wanted to make kind of a sport bike,” said D’Occhio. “They basically took a full dresser and they stripped it down.”

Some shortcuts were taken. The Electra Glide model had a feet-forward riding position with floorboards, while the Sportster had pegs underneath the rider. Harley-Davidson wanted mid-pegs on the FX Super Glide, which resulted in an oddly configured, backward-facing shifter lever above the operator’s left foot.

“They put a foot peg in the middle of the primary (drive) … and all they did was take the shifter and turn it backwards. It was the worst thing ever. It was terrible. Immediately, the next year, they realized what they had done and they put it back the other way,” D’Occhio said.

D’Occhio began dry assembly of the bike last year. The engine and transmission were sent to Bob Fernandez to be rebuilt and John Baltera was tapped to do the paint. D’Occhio’s son somehow found decals.

“It’s about 98 percent complete. There’s a couple of parts that I’m missing,” said D’Occhio. “I really want to get it to a 99-point bike where everything is perfect.” It was while attending the Yankee Chapter of the Antique Motorcycle Club of America’s meet at the Terryville Fairgrounds in early August that he found a model-specific shock absorber.

A close inspection of the Super Glide reveals that the muffler isn’t correct and the boat-tail is missing “Super Glide” badges on either side. “There are some parts I threw on just to finish it (for the show), but I want to take ’em off because they’re not right. Some parts are worn, too. I’m not satisfied with the quality of them,” he said.

Mechanically, though, it’s almost ready to run. “It’s 90 percent done. We have to finish wiring the bike, put gas and oil in it, and fire it up.”

D’Occhio hasn’t restored the Super Glide to be a regular rider. He already has a 1985 Harley-Davidson FLHTC Electra Glide to serve that purpose. “I’ll take rides on it, but I have a full dress that I’ve had since 1985 that everybody makes fun of. They call it ‘The Couch.’ But I love that bike. It’s comfortable. I feel comfortable on it. I’ll ride that,” he said.

“This is more to show and I won’t sell it. This here is something I’ll leave to my son to keep. Hopefully he’ll keep it with the rest of the antique bikes here,” he said, referring to the many old bikes on display at the store.

The Super Glide got loads of attention at last Sunday’s show at Doc’s and D’Occhio got the sense that the perception of the model may have changed. “Now this is a cool looking bike,” he said. “Back then it was ugly.”

(A version of this column appeared in the “Republican-American” newspaper on Sept. 21, 2019.)

An award-winning print and broadcast journalist, Bud Wilkinson writes the "RIDE-CT" motorcycle column and the "My Ride" vintage car feature for the "Republican-American" newspaper in Waterbury, CT. He studied journalism at Ohio Wesleyan University where he received a B.A. degree. He currently rides a 1987 BMW R 80 RT and a 2014 Triumph Bonneville.
Previous Removal Of Loud Pipes Brings Relief
Next Favored Greenway Route For Thomaston Dam Revealed