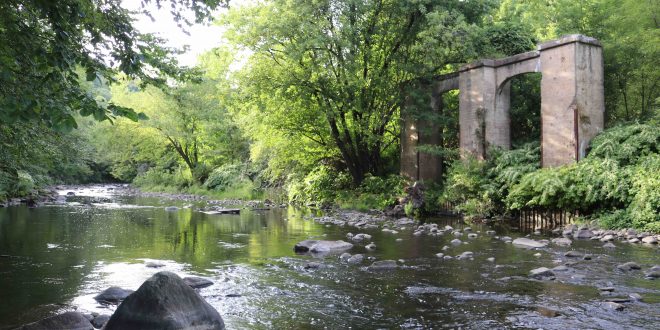 GOSHEN, CT – Tony Gasper calls the favored proposal “the most palatable of the worst-case scenario”; the worst case scenario being dirt bike riders being forced to share long-treasured land behind the Thomaston Dam in Thomaston, CT with pedestrians and bicyclists.

Gasper, president of the New England Trail Rider Association, is referring to a “preferred option” released publicly this afternoon for the location of a portion of the planned Naugatuck Valley Greenway above the dam.

“Our preferred option is the status quo,” said Gasper, who has been leading the fight by dirt bike enthusiasts against the greenway. They are fearful that it will encroach upon or wipe out an off-road riding area that has existed behind the dam (and on the west side of the Naugatuck River) since 1975.

Roughly 40,000 riders use the area annually, and it is the only area in the state open to the public for off-road riding. While recreational users are not barred from the land, it is a relatively remote location and not easily accessed.

That fear that the riding area will be heavily impacted or lost is not likely to abate now that it’s a step closer to reality, despite, as reported two weeks ago, a compromise between greenway planners and NETRA that has partially reduced the greenway’s potential impact.

It wasn’t until a steering committee meeting for the greenway this afternoon that the preferred route was revealed.

The “Staff Recommendation” bypasses the northern-most three miles of the trail riding area by going down the east side of the river in Harwinton from Spruce Brook at the north end to where Castle Bridge once stood over the previous Route 8 at the south end.

The favored route then crosses over to the west side of the river at Castle Bridge and follows the abandoned Route 8 roadbed southward for two miles to the dam; a stretch that will require joint usage by dirt bikers and those enjoying the greenway.

As proposed, the 16-foot-wide greenway for walkers and bicyclists would run down the middle of the old highway, with what would essentially be frontage roads on either side for motorcyclists to use when not on the trails.

The abandoned stretch of old Route 8 is currently used by riders to access and egress the trails at various spots. There are currently 43 points along the roadway where riders can get on and off the trails, according to Aaron Budris, senior regional planner for the Naugatuck Valley Council of Governments in Waterbury.

Budris said the proposed route envisions that the number of spots motorcyclists and other users might cross paths is reduced to 10.

Gasper estimates that three-fourths of the trails are located in that two-mile stretch between the dam and Castle Bridge, which was taken down decades ago, leaving only abutments.

Gasper’s opposition to placing the greenway in riders’ territory, in addition to simply preserving the area for riders, centers on the safety of those using the land. “It’s still a concern to me,” he said of the mixing of riders and others. “There’s the risk of a little bit of a turf war.”

Two other options for the greenway between Castle Bridge and the dam were located on the east side of the river, but were rejected because of high cost and the fact nine parcels of land are privately owned in Harwinton. The bulk of the riding area is on U.S. Army Corps of Engineers property.

The cost of the Spruce Brook to Castle Rock portion of the greenway is projected at $4.9 million, with the Castle Rock to dam portion pegged at $1.8 million. The estimated cost of bridging the river at Castle Bridge is $1.3 million, which brings the total for the five-mile stretch to $8 million.

The greenway is expected to be funded by federal and state grants. It will be the responsibilities of the cities and towns along the route as well as the U.S Army Corps of Engineers to build and maintain the greenway.

Greenway planners expect to have a routing report issued by early November. After that, there will be an at least 30-day period for public comment, followed by a final report by year’s end.

When completed, the Naugatuck Valley Greenway will run 44 miles from Torrington to Derby.

An award-winning print and broadcast journalist, Bud Wilkinson writes the "RIDE-CT" motorcycle column and the "My Ride" vintage car feature for the "Republican-American" newspaper in Waterbury, CT. He studied journalism at Ohio Wesleyan University where he received a B.A. degree. He currently rides a 1987 BMW R 80 RT and a 2014 Triumph Bonneville.
Previous Rare FX Super Glide Gets Restored By “Doc”
Next CT Trade-In Fee Rising To $100 On Tuesday