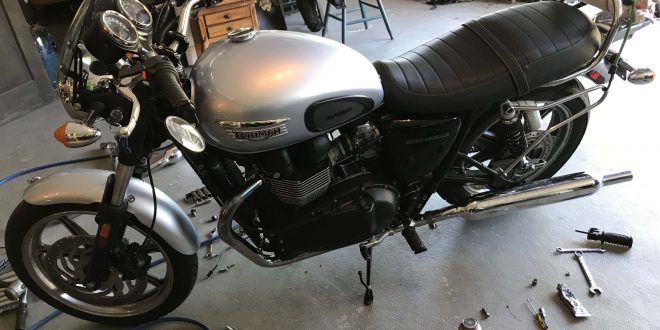 KENT, CT – Finally, relief from the roar. A solution to a nagging problem that should make riding more satisfying and cause fewer headaches.

It was 18 months ago that I acquired a peppy used 2014 Triumph Bonneville from Mark’s Motorsports in Enfield, CT. The original owner had added bar-end mirrors, a fly screen, saddlebags and Predator exhausts from British Customs.

The Bonnie had a nice growl when the salesman fired it up. Sold.

I soon replaced the grab bar in back with a luggage rack, and took off the saddlebags. Bad design by Triumph has them secured by Velcro straps which constantly pull apart, leaving the bags flapping in the breeze.

Initially, I found the Predator pipes to be an enhancement (and the bike to be a blast). The loud pipes sounded sick and people – neighbors, pedestrians, and presumably those in cemeteries – noticed them. Wherever I went, the bike – and rider – got noticed. How cool!

Quite quickly, though, they became tiresome and a detraction; a serious drawback to an otherwise excellent riding experience.

Long Rides Were No Fun

Long rides became impossible because of the unrelenting noise. Even with ear plugs and a full-face helmet, the exhaust noise penetrated. When riding with others, I felt compelled to go to the back of the pack so my friends wouldn’t be blasted.

Seeking a solution, I went online to the British Customs website and ordered some “Quiet Core” baffles costing $29.95 for the ends of the pipes in hopes of reducing the decibel level. They arrived … and didn’t fit. They were too small for the openings at the rear of the pipes.

An email exchange with British Customs revealed they were designed for the Predator Pro model exhausts. The Predator was a discontinued model and baffles were never made for it. The “Quiet Core” inserts got sent back for a refund.

A Solution Was Needed

Winter came and went and another riding season arrived. Through spring and early summer I suffered with the increasingly irritating exhaust noise, often taking my 1987 BMW R 80 RT on rides instead of the Triumph. The loud pipes were just too damn loud to tolerate.

Recently, I began considering selling the Bonneville and finding something else – anything else. I visited Kent Road Motorsports in Cornwall, CT last weekend and looked at a reasonably priced 2006 Triumph Tiger adventure bike, but it was too tall for my short inseam.

I then swung by Iron Horse Customs/Royal Enfield of Kent. It was while talking with co-owner Rock Dolson that a memory stirred. I recalled him saying a long time ago that he had some stock pea-shooter silencers that he’d taken off a Triumph and placed on a shelf. No harm in inquiring, right?

Well, that was indeed the case. He’d removed the stock pipes off of a 2013 Triumph Bonneville that he’d bought from Libby’s Motoworld in New Haven. In fact, after-market exhausts went on his bike before it even left the dealership.

His pea-shooters were essentially new, and were collecting dust on a shelf. He agreed to sell them at a very reasonable price – far, far less than the $800 a pair that Triumph was asking.

Late Thursday morning, I rode over and Dolson installed them. There was one blip in the process. The headers on my Bonneville weren’t suited to the OEM pipes. Fortunately, Dolson had saved the headers from his Bonneville and threw them in as part of the deal.

Riding home, the silence was, yes, deafening. Wind noise from my helmet was much more noticeable that any engine noise. Heck, there were moments when the engine couldn’t be heard. The Bonnie now sounds like a muted sewing machine. Granted, whatever “cool factor” that existed with the Predator pipes is gone.

I can’t yet say how much I like the stock pea-shooters. They certainly sound horribly tinny in the accompanying video; less so when riding. But my head wasn’t pounding when I pulled in the driveway and none of the neighbors noticed my return.

With the loud pipes gone, it’s now possible to come and go with a degree of stealth.

Now I need to find a fix for the saddlebags.

An award-winning print and broadcast journalist, Bud Wilkinson writes the "RIDE-CT" motorcycle column and the "My Ride" vintage car feature for the "Republican-American" newspaper in Waterbury, CT. He studied journalism at Ohio Wesleyan University where he received a B.A. degree. He currently rides a 1987 BMW R 80 RT and a 2014 Triumph Bonneville.
Previous Bike Thefts Lower In New England
Next Rare FX Super Glide Gets Restored By “Doc”