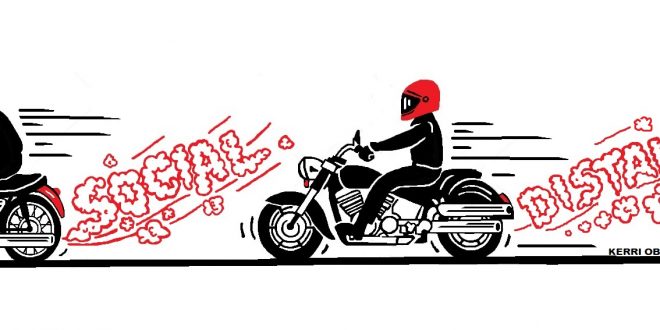 RIDE-New England: A Stressful Time For All Riders

There’s a somewhat flippant saying that a motorcyclist is “a person willing to take a container of flammable liquid, place it on top of a hot engine, and then put it between their legs.”

The unstated message is that riding is dangerous and takes a modicum of courage. It is and it does.

And most every rider is willing to accept the risk. Those who can’t quickly quit riding.

While there isn’t much of a chance of a modern bike going up in flames – I did once have an old Honda develop a fuel line leak and spew gas atop the engine as I was riding into Litchfield, CT one day – there are real risks. On any given day, a rider might not make it home because of an inattentive driver, a patch of oil or debris on the road, or some furry creature running across the road.

There’s also saying in riding that goes, “There are those who have gone down and those who will go down,” which encompasses the entire riding community.

I’ve dumped a bike three times, each time at slow speed and each time without injury. One time it was because of sand, which caused my rear tire to slide sideways. Another time a car pulled into my path without seeing me, forcing some overly hard braking. The other time I simply miscalculated the slope of my driveway, ground a foot peg into the asphalt and had my bike fall over on me.

There have been close calls, too, such as a week or so ago when a box truck came screeching around a corner and into my lane on Wykeham Road in Washington, CT. For an instant, I thought the truck was either going to hit me or, more likely, topple over and crush me. Thanks to rider training and luck, I reacted properly and avoided catastrophe.

That fleeting scare, though, is nothing compared to what I’m feeling now with the COVID-19 pandemic producing increasingly grim data daily. I’ll admit it. I am scared. I’m panicked, too, and not because of the toilet paper supply.

Being 66 and in a higher risk group, I began self-isolating more than a week ago. Except for one trip to the grocery store to stock up (on everything but hand sanitizer, toilet paper and ground beef), some therapeutic hikes with friends (maintaining six feet of separation), a short trip to a friend’s to drop off an item, and that one motorcycle ride, I haven’t left my property.

What has me freaked is the fact there’s so much unknown about COVID-19 and there’s no firm notion of the length of this tunnel we’re all now living in. I’m not alone in this feeling, but there’s little comfort in having company. Still, regular texts and messages with friends are welcomed contact.

Is There Any Upside?

Some rider friends are seeing an upside to the pandemic. They’re enjoying the decreased traffic and are viewing riding as self-isolation, especially if you’re wearing full gear and a full-face helmet. Riding may now actually be one of the safest things to do. After all, social distancing when riding is standard practice. The only spot where the virus might be encountered is at the gas pump.

What’s also unknown and scary is the potential longterm impact of the pandemic.

Will there be any motorcycle shows this year? Here in Connecticut, the Cabin Fever Custom Car & Motorcycle Show at the Naugatuck Entertainment Facility on April 4 and 5 and Ride 1 Rally set for April 18 at Lime Rock Park racetrack in Lakeville have already been scrapped, at least on those dates. The Greenwich Concours d’Elegance from May 29-31 has canceled, too. More will likely do so soon.

The Scariest Times May Still Be Ahead

What’s to become of the many eateries that riders routinely visit and enjoy. Will be they able to survive a prolonged state where they’re only allowed to provide takeout food? How many restaurants will be gone once this crisis has passed?

Declining ridership in recent years has already forced some dealers out of business. COVID-19 will likely mean the closure of more of them because even when the pandemic is over, the monetary damage to riders could make motorcycles and accessories far less of a priority. Motorcycling riding is a recreation and a luxury, not a necessity.

What’s To Become Of Dealers And Manufacturers?

Up until now, most dealerships have stayed open and engaged in rigorous cleaning and advised customers of their practices during this COVID-19 crisis, but and temporary closures or partial closures are now underway.

And what about the manufacturers themselves? Harley-Davidson suspended production on Wednesday after an employee tested positive. If the pandemic lasts a long time could some brands disappear?

Lastly, and of most concern, will the virus claim friends? Many of my friends are 60+. These folks may be stoic riders but they are vulnerable, especially if they mingle too closely with others. Even with self-isolation, could the virus claim me? It is possible.

In the meantime, maybe “wind therapy” is the answer to calm the nerves somewhat and to help pass the time, a pleasurable distraction during an uncertain time when everyone feels powerless. I never thought I’d see a time when riding was safer than taking four wheels to the grocery store.

(A version of this column originally appeared in the “Republican-American” newspaper on March 21, 2020.)

An award-winning print and broadcast journalist, Bud Wilkinson writes the "RIDE-CT" motorcycle column and the "My Ride" vintage car feature for the "Republican-American" newspaper in Waterbury, CT. He studied journalism at Ohio Wesleyan University where he received a B.A. degree. He currently rides a 1987 BMW R 80 RT and a 2014 Triumph Bonneville.
Previous Harley-Davidson Suspends Production
Next Dealers React To Changing COVID-19 Situation