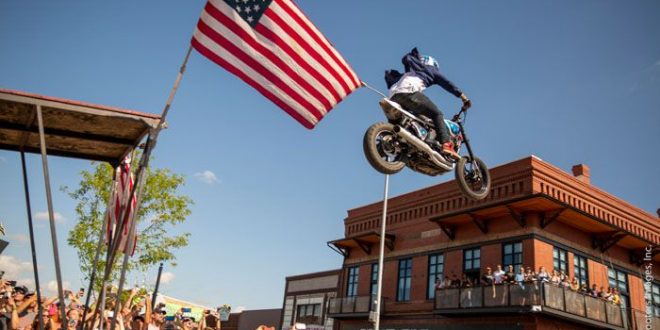 STURGIS, SD – In an 8-1 decision on Monday night, Sturgis City Council voted that the COVID-19 pandemic be damned – the 80th annual Sturgis Motocycle Rally will be held Aug. 7-16.

It will likely be a much more subdued, safety-first rally with fewer events.

“There’ll be several changes for the 80th. Almost all of them are designated towards trying to insure that there’s no large gatherings of people on property that the city maintains,” said Sturgis City Manager Daniel Ainslie in an audio clip posted today by KBHB radio.

“That means not having a B-1 flyover, not having opening ceremonies, not having all the contests and bands at Harley-Davidson Rally Point, having additional sanitation things, including sanitation stations so that people can frequently wash their hands.”

There will also be no photo towers and sidewalks will be sanitized in the evenings. Vendors will receives guidelines and protocols to protect employees and customers.

“I think the message behind this is even though this is the 80th, at the same point we’re going though a pandemic and there should not be a mass, mass number of people crowded in one location at the same time. So, as much as possible, trying to discourage that,” said Ainslie.

The “Rapid City Journal” reports that $105,000 set aside to advertise the Sturgis Motorcycle Rally won’t be spent.

“The reality is there are going to be people coming to our community and we want to try to protect our residents as much as possible, people that work in the community as much as possible but also make sure that we’re able to prepare for sanitation and emergency services and things like that that we have to be able to respond to,” Ainslie said.

Should cases of coronavirus spike in South Dakota leading up to the rally, additional changes could be implemented.

Since 2010, RIDE-CT & RIDE-NewEngland has been reporting about motorcycling in New England and portions of New York.
Previous Texting Is The Top Reason For Distracted Driving
Next Triumph Gets Into E-Bike Business With Trekker GT
NEW POLL: Should motorcycle dealers have on-site events where they sell or serve beer or other alcoholic beverages?