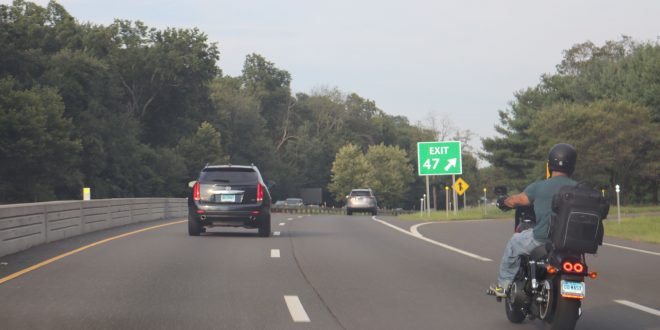 Texting Is The Top Reason For Distracted Driving

FOSTER CITY, CA – Drivers who text are a huge concern for motorcyclists and a recently-released survey of 1,000 motorists by the website Insurance.com reports that 87 percent of them think distracted driving is worse now than it was two years ago.

And the top reason for distracted driving? Texting.

What is bound to perturb riders is that drivers apparently just don’t give a damn for others on the road. According to the survey, “A whopping 92 percent acknowledged that texting and driving is as dangerous as driving under the influence.”

A total of 24 percent of the respondents gave texting as the top reason for distracted driving, followed by navigation systems at 20 percent, and children in the car at 16 percent.

Talking on the phone and adjusting music tied for the fourth spot at 11 percent, followed by adjusting the heater/AC at eight percent and eating at five percent.

Among the respondents, nearly 25 percent said they text regularly; 11 percent reporting that they text daily and 12 percent saying they text three or four times a week.

The reasons given for texting were varied; from needing to tell a family member something important (33 percent) and responding to an incoming text (25 percent) to telling someone an arrival time (19 percent) and texting for work purposes (11 percent).

Texting while driving does have consequences, the survey results indicated. A total of 18 percent of those surveyed said they’d received a ticket for texting or distracted driving, with eight percent saying they’ve been involved in an accident because of the practice.

Insurance.com reports that texting can be costly for drivers. “Accidents and injuries are the main concerns with distracted driving,” said managing editor Lee Masterson.

Since 2010, RIDE-CT & RIDE-NewEngland has been reporting about motorcycling in New England and portions of New York.
Previous Always Riding: De-Icer Takes Fun Out Of Winter, Ruins Parts
Next Sturgis City Council Votes To Hold 80th Rally In August