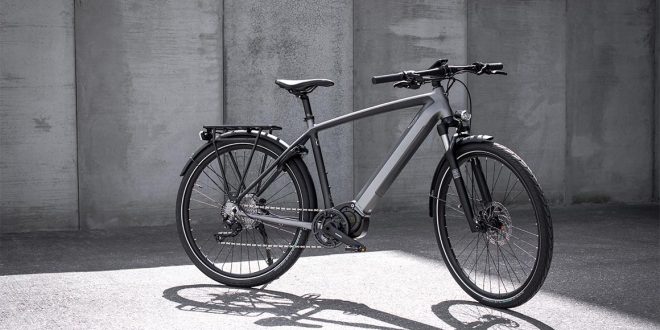 Triumph Gets Into E-Bike Business With Trekker GT

HINCKLEY, ENGLAND – Motorcycle manufacturer Triumph is getting into the electric bicycle business with a Trekker GT model that has a starting price of an entry-level motorcycle – $3,750.

The company says the Trekker GT, which it unveiled on Tuesday, was designed in the U.K. and is the first e-bike in the company’s history. It was created for “commuting, fitness and everyday riding fun.”

The model will have an aluminum frame, Shimano hubs, battery, charger, motor and shifter and a Selle Royal Vivo Havac Tech saddle. It will weigh in at 53 pounds and reportedly has a range of 93 miles on one charge.

From its looks, the Trekker GT appears more suited to street use than riding on sloppy trails. It will be available in the U.K., the U.S. and much of Europe (except Germany and Austria) initially.

Triumph did not disclose whether it has a production partner for the Trekker GT or if it will be produced at a company plant in England or Thailand.

Of historical note, Triumph was founded in 1884 as a bicycle maker and began building motorcycles in 1902 in Coventry, England.

Since 2010, RIDE-CT & RIDE-NewEngland has been reporting about motorcycling in New England and portions of New York.
Previous Sturgis City Council Votes To Hold 80th Rally In August
Next Chicopee Police Officer Dies In Motorcycle Crash On I-91