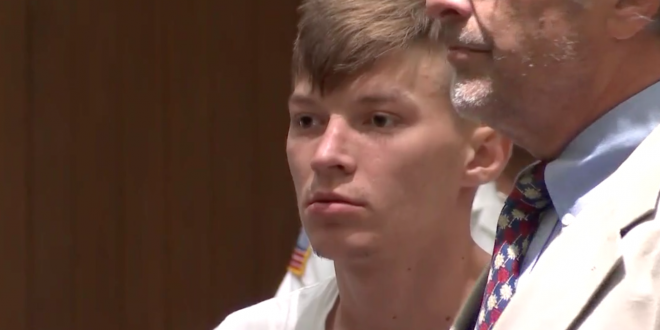 The lawyer for the truck driver charged with homicide for the crash in New Hampshire last June that killed seven motorcyclists claims one of the riders was drunk and actually caused the accident, not his client.

Attorney Jay Duguay filed a motion on Tuesday for a hearing seeking the release on bail of 24-year-old Volodymyr Zhukovskyy, claiming the initial account of the accident by New Hampshire State Police was “deeply flawed.”

Duguay says a later independent crash assessment suggests that rider Albert “Woody” Mazza Jr., who died in the accident, was to blame and that his motorcycle “was in fact protruding over onto the center line when it struck the truck.”

A report by WBUR says the motion notes information provided by the state shows Mazza “had been turned around looking back at the group of riders behind him just before the accident and that autopsy reports show that at the time of the crash, Mazza’s blood-alcohol level was 0.135%, well above the legal limit of 0.08%.”

Prosecutors have until April 10 to respond to the motion.

With the peak of the COVID-19 pandemic expected to hit soon, Wagner Motorsports in Worcester, MA on Friday “made the most difficult decision to suspend all operations for a period of time.”

The BMW, Ducati, Indian and KTM dealership had previously closed its showroom, but was continuing to do service by appointment.

A Facebook post by Wagner Motorsports says management will assess the situation again on April 15 and “plan a date for our reopening.”

As a result of the pandemic most dealers in the Northeast have closed showrooms, while continuing service by appointment with curbside drop off and/or pickup and delivery. Some are offering sales remotely.

A North Carolina rider has filed a lawsuit against Harley-Davidson claiming a design flaw resulted in a tank slapper (or “death wobble”) while he was riding his father’s 1999 Electra Glide Classic and left him seriously injured.

William “Alex” Rouse was riding near Greenville, NC on April 2, 2018 when he crashed. The lawsuit was filed in U.S. Middle District Court in Harrisburg, PA. The motorcycle was built in York, PA.

PennLive.com has the details.

Matt Levatich’s exit as president and CEO of Harley-Davidson, announced in late February, was the highest profile but not the only big change in the company’s executive suite.

Kumbier has been COO since October 2017. She joined Harley-Davidson in 1997 and was previously senior vice president of product and operations, leading a team of more than 4,500 employees.

New Models In Pipeline From Harley-Davidson?

The British website MCN is out with a report that Harley-Davidson apparently has flat track and café racer style bikes in the pipeline that will use the motor from the upcoming Pan America adventure model.

MCN says the accompanying pics (below) first appeared in an investor document last year and that patent filings have now confirmed that the company is moving forward with them.