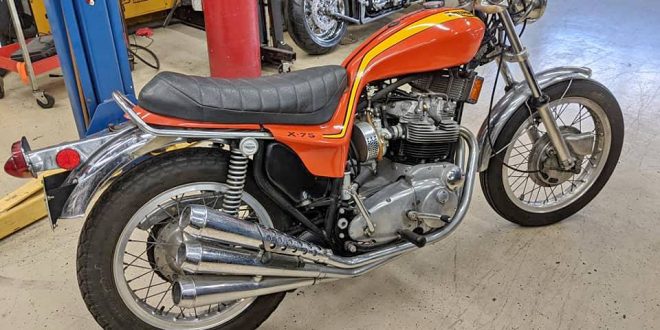 The Triumph X-75 Hurricane is a rare and unforgettable model, remembered for its wrap-around bodywork, triple exhaust and bright orange and yellow paint scheme.

Designed in the United States by Craig Vetter for BSA, but ultimately sold as a Triumph after BSA went out of business, only 1,200 examples of the Hurricane were produced in 1972 and 1973.

To have a Hurricane be listed for sale is uncommon. To have two up for grabs simultaneously and less than 100 miles apart is somewhat amazing. Yet that’s the case.

John Narciso, owner of Westchester Powersports of Bedford Hills, NY, has listed one on Facebook Marketplace for a customer in Ossining. It’s being sold along with a 1965 Triumph Bonneville and a 1969 Bonneville. The asking price for all three is $30,000.

“These bikes haven’t been run in 25 years, left in a garage,” the ad advises. “All motors turn over freely, and the fuel tanks have no rust or corrosion in them”

Narciso says his customer got the Hurricane from a buddy in “a horse trade deal.” It’s being sold because “the value’s up and it’s time to move on.”

The Hurricane that Narciso is selling proclaims its brand of origin in two places. The engine is stamped with the BSA logo. It also has a rubber cap on the gas tank that bears the BSA name. The model was adapted by Vetter from BSA’s Rocket 3 model.

The other Hurricane is listed on Facebook Marketplace by Rich Lupi in Glen Spey, NY. The asking price for it is $24,000 and the ad says it’s a 1972 model.

“This is my family owned model since new,” the ad states. “This is not a project bike. It’s pretty much all original.”

Since 2010, RIDE-CT & RIDE-NewEngland has been reporting about motorcycling in New England and portions of New York.
Previous It Certainly Pays To Be A Harley-Davidson Executive
Next TWIR (March 7) – Indian, BMW And Royal Enfield News