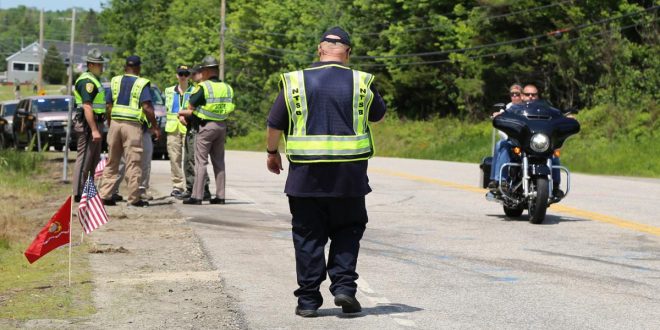 June 24, 2019 Comments Off on Victims In Jarheads MC Crash Identified

CONCORD, NH – The identities of the seven people killed in the horrific crash between a pickup truck and a group of motorcyclists on Friday evening have been released.

Four of the dead were from New Hampshire, two from Massachusetts and one from Rhode Island. Each died as a result of blunt force trauma in the crash on Route 2 in Randolph, NH.

In releasing the names and causes of death at a Sunday afternoon news conference, state Deputy Attorney Jane E. Young said, “I don’t think any of us can understand how these families are doing. I don’t think that the word devastation can begin to describe the pain and the anguish.”

The five men who died in the crash were all members of the Jarheads Motorcycle Club. The club draws its membership from Marines and Fleet Marine Force Corpsmen.

The conditions of two others injured in the crash were also released. Joshua Morin, 45, of Dalton, MA remains hospitalized in stable condition at the Maine Medical Center in Portland, while Steven Lewis, 58, of Brimfield, MA was treated and released from an area hospital.

The crash occurred when a 2016 RAM 2500 pickup truck driven by 23-year-old Volodymyr Zhukovskyy of West Springfield, MA collided with the group. Zhukovskyy, an employee of Westfield Transport in Springfield, MA, was alone in the truck and pulling a flatbed trailer when the crash happened.

Zhukovskyy wasn’t hospitalized and hadn’t been charged as of Sunday night, but the investigation into the accident continues involving state and local police and the National Transportation Safety Board.

“All I can tell you is that it is active and ongoing,” said Young. “There are dozens of agents and officers up in the area working every aspect of the case.”

As of Monday morning, a GoFundMe page started by the Jarheads MC “to help ease some of the financial burden left behind after this tragic event” has raised $313,816 out of a $700,000 goal since being started Saturday. A total of 6,348 people have donated.

Flags on all public buildings and ground are flying at half-staff from sunrise to sunset in New Hampshire today as directed by Gov. Chris Sununu. “Friday’s tragedy has struck our state and our citizens in a profound way,” Sununu said.

An award-winning print and broadcast journalist, Bud Wilkinson writes the "RIDE-CT" motorcycle column and the "My Ride" vintage car feature for the "Republican-American" newspaper in Waterbury, CT. He studied journalism at Ohio Wesleyan University where he received a B.A. degree. He currently rides a 1987 BMW R 80 RT and a 2014 Triumph Bonneville.
Previous Fundraising Begins For Jarhead Crash Victims
Next Pickup Driver In Crash Is Headed to New Hampshire