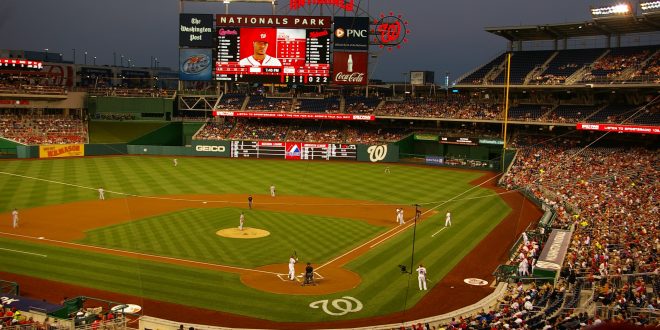 Who Cares If Big League Baseball Ever Returns…

June 23, 2020 Comments Off on Who Cares If Big League Baseball Ever Returns…

Vividly remember my first trip to Yankee Stadium, a visit that got locked into family lore. My dad had regaled me about how big the old stadium was, but my reaction upon walking up a ramp and seeing the field for the first time was lukewarm. “It’s not so big,” I said.

Listened to games on the radio from far away, back when AM signals boomed in at night from places like St. Louis.

In college, I often attended games at Cleveland’s monstrous Municipal Stadium. Saw two National League Championship Series playoff games in 1973 in Cincinnati with the Reds hosting the Yogi Berra-managed New York Mets thanks to the generosity of my Sigma Chi fraternity “big brother.”

As an adult, I visited even more parks. Dodger Stadium and The Big A in Anaheim. With friend Tom Teuber, I sat in the sunshine in the bleachers at Wrigley Stadium and witnessed the upper deck rowdiness of the old Comiskey Park at night – on the same day.

We also visited Tiger Stadium in Detroit and County Stadium in Milwaukee.

Became a regular at what was then Bank One Ballpark when I lived in Phoenix. Even wrote stories for “Diamondbacks” magazine.

I loved baseball. Visited the National Baseball Hall of Fame and Museum in Cooperstown, NY and the Field of Dreams in Dyersville, IA.

The affection for what used to be the “National Pastime” didn’t abate when I moved back to my childhood home in Connecticut from Phoenix in 2002. Trips to Baltimore and Washington to see the Orioles and Nationals became routine because the cost for the experience was less and good seats were easy to come by.

Attended the longest playoff game in MLB history on Oct. 4-5, 2014 when the host Washington Nationals lost to the San Francisco Giants 2-1. The 18-inning game lasted six hours, 23 minutes. (The game actually tied for longest with two others; Atlanta Braves and Houston Astros in 2005 and the Boston Red Sox and Los Angeles Dodgers in Game 3 of the World Series in 2018).

Why has my love ebbed? Why does the prospect of no baseball or limited baseball this year not bother me in the least? Let me count the ways.

The price of tickets and concessions. Too costly. When the new Yankee Stadium opened and the club tried to extort the customers, I stayed away. Finally paid one visit just to say I’d been there.

Length of games. Just watch some YouTube clips of how quickly the game used to be played. No stalling, no adjusting of batting glove straps between every pitch, no excessive changing of pitchers.

Cheating. Well, OK, there were spitballs and more, but no PEDS and exotic sign stealing. Disdain the likes of Mark McGwire, Barry Bonds, Alex Rodriquez, Roger Clemens, Sammy Sosa and so many more.

Walk-up music. Baseball’s more like a carnival than an athletic competition.

Lack of fundamentals. Everyone’s trying to hit a home run. Too many strikeouts.

Suffice to say, if I never see another Major League Baseball game, it won’t bother me.

Bud Wilkinson writes the "RIDE-CT" motorcycle column and the "My Ride" classic car feature in the "Republican-American" newspaper in Waterbury, CT. A prep school graduate of Vermont Academy, he received a B.A. degree journalism from Ohio Wesleyan University in 1975. He is the recipient of a Scripps Howard Foundation National Journalism Award in 1992 and a 1991-92 regional Emmy Award for commentary. He currently rides a 1987 BMW R 80 RT and a 2014 Triumph Bonneville and drives a 2010 Mazda MX-5 Miata and 2008 Ford Ranger pickup.
@https://twitter.com/ridect
Previous Indian Offers Way To Cool Your Can With New Seat
Next Speed Kills In New England, Especially New Hampshire