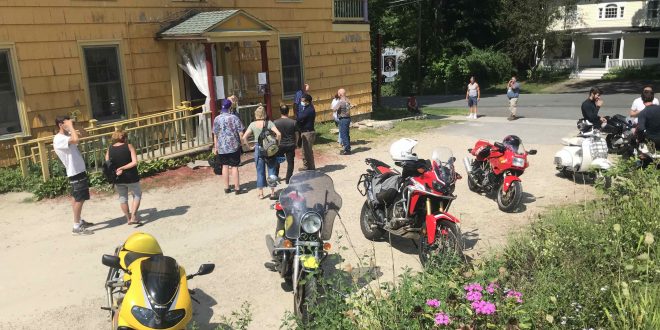 FALLS VILLAGE, CT – The colorful, eccentric and British-themed breakfast and lunch spot started by Annie and Greg Bidou in 2002 has been a gathering spot for motorcyclists, especially on Sunday mornings. It has also catered to thru-hikers on the nearby Appalachian Trail. The Bidous labors will appropriately come to an end on Labor Day.

The weekend influx of riders that has kept the cafe afloat all summer, but they will soon be putting their motorcycles away for the winter. The hefty bills for food supplies, utilities and insurance would have continued, though, and a small profit would have quickly become red ink.

Innumerable riders from across Connecticut, and beyond, are already bereft over the loss of Toymakers Cafe. Its parking lot has routinely been a pop-up museum with long extinct models on display. Unlike other rider hangouts, the cafe has also been a non-denominational place to swap tales and unwind. All riders have been welcomed no matter the brand name on their bikes’ gas tanks.

But the Bidous are tired after so many years of success. “It wasn’t fun anymore. Emotionally, it was very trying,” said Greg earlier this week of operating in a pandemic. “Nothing is able to be settled until COVID is settled,” Annie added.

For now, though, closing is the smartest option financially. They’re looking at possibly renting the cafe space on the first floor of the two-story house at 85 Main St., while continuing to live upstairs. Or they could repurpose the space themselves.

“We are very emotional about it,” said Greg. “We spent 18½ years here. We generated a lot of friendships. We hate to let our customers down. We’ve been wracking our brains: How can we reinvent ourselves?”

Annie and Greg had met while commuting by train from Fairfield County to jobs in New York City. In 2001, they acted on a dream to pursue a cafe that would welcome riders, with Greg opening a side business in the barns behind the cafe that is devoted to old British motorcycle parts.

The cafe was only open Thursday through Sunday and always closed for the month of January. Inside, there were two large communal tables, which encouraged visitors to make new friends. Until the pandemic hit and indoor service was discontinued, coffee was served in mugs, many bearing the names of British motorcycle manufacturers “Triumph,” “BSA” and “Norton.”

The Bidous are very emotional about the pending closure. Asked to describe what he’s feeling, Greg replied, “Confused, concerned, worried. What are we going to do going forward? What happens to the cafe space? Are we going to rent? We need some time to step back and assess.”

Greg recently turned 73 years old. Hard as it is to believe by looking at her, Annie is 65. Operating a cafe is more of a chore than it once was, even without a pandemic. Three times during their annual January vacation break, Greg has had replacement surgeries; on his knee, hip and shoulder. Serving as the cafe’s sole chef is exhausting.

“I haven’t been to a motorcycle meet in years and I miss it,” he said, projecting what he may do in the future, provided that motorcycle meets reappear after this year’s pandemic shutdown.

Annie is most satisfied that she was able to put some of her ideas about hospitality into practice during Toymakers’ run. “That was the one thing I cared most about. My goal was always to make people happier when they left Toymakers than when they came in,” she said.

Among its many customers was Emmy Award-winning actress Laura Linney, who lives nearby. Television host Dennis Gage even showed Toymakers Cafe last year on an episode of “My Classic Car.”

There is still one last task to complete – a cookbook devoted to Greg’s recipes and profiles of some of the eatery’s regulars. “Recipes for a Good Ride – The Toymakers Cafe Cookery Book” is being jointly authored by Ann, Greg and the guy whose face is pictured atop this column, who the Bidous bestowed with the title of “Mayor” of Toymakers Cafe. It is expected to be released in autumn.

What I’ll miss most, besides Ann’s warmth and Greg’s gruffness, are the regulars who made Toymakers Cafe a weekly habit. Their weekly presence helped make Toymakers Cafe much more than a place to nosh. It became an irreplaceable home away from home, and a family.

Annie and Greg gave me several Toymakers Cafe T-shirts over the years with the word “Mayor” across the back, including a rare one with green graphics. Embarrassed, I found excuses not to wear them because they seemed too self-important. They will be worn proudly and with sadness when last respects are paid on Sunday and Monday.

(A version of this column appeared in the “Republican-American” newspaper on Sept. 4, 2020.)

An award-winning print and broadcast journalist, Bud Wilkinson writes the "RIDE-CT" motorcycle column and the "My Ride" vintage car feature for the "Republican-American" newspaper in Waterbury, CT. He studied journalism at Ohio Wesleyan University where he received a B.A. degree. He currently rides a 1987 BMW R 80 RT and a 2014 Triumph Bonneville.
Previous Honda Bringing “Trail 125” Model To U.S.
Next TWIR: Japan Brands Team Up On Electric Development