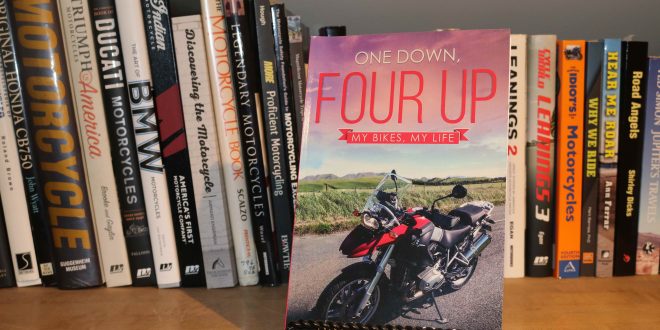 Bookshelf: “One Down, Four Up” Recounts Life On Bikes

Like every longtime motorcyclist, Nigel M. Sainsbury has memories of the bikes that have come and gone and, in his particular case, the riding adventures around the world over the years.

Unlike others, though, he has written about his life on bikes in the recently released book “One Down, Four Up – My Bikes, My Life.”

Except that wasn’t his original intention. The book became an unanticipated spinoff of a planned autobiography for his children.

“I was inspired by a friend of mine who had throat cancer; who didn’t think he’d live long enough to see his grandchildren. I thought there’s lots of things about my life that my children don’t know about me,” he recalled last month at a Sunday morning Bikes and Breakfast gathering in Poolesville, MD.

When the autobiography grew to 500 pages, Sainsbury soon realized that there was a book within the book; a tome about his life on two wheels, “so I sort of pulled the stories out. I did a bit of research on the bikes and the brands and put a little bit of context around what was going on in my life at the time, and the book just fell out like that. It was an awesome experience and a lot of fun to do.”

A native of a small coal mining village in Wales, Sainsbury has been riding since he was in short pants. His riding career began in 1962. “My first scooter was at two years old … but realistically I’ve been riding since I was 13 years old,” he said.

“I loved motorcycles even before I had ridden one. I found an NSU Quickly rotting away in a neighbor’s garden when I was 13. I didn’t have a clue what it was, and I got the thing going using Kellogg’s cornflakes packets; boxes that I used to cut gaskets out.

“I made a head gasket and a base gasket and carburetor gaskets and got this thing running, this two-stroke, single-cylinder moped. It didn’t last for very long, obviously, but enough to inspire me to think that this is fun, man.”

These days, Sainsbury owns a 2018 Triumph Bonneville T120 and a 2014 Kawasaki KLR 650. “I’ve always had bikes that reflect what I was thinking at the time and my passion for what I wanted to do,” he said.

“One Down, Four Up…” is written for riders, who understand the recreation’s allure, and for non-riders. “I talk about in there how it’s affected both my physical and my mental well being; probably mental more than anything because I’ve almost killed myself twice on a motorcycle – not deliberately, obviously,” said Sainsbury, who lives in Fairfax, VA.

“One Down, Four Up…” is available on Amazon.

Bud Wilkinson writes the "RIDE-CT" motorcycle column and the "My Ride" classic car feature in the "Republican-American" newspaper in Waterbury, CT. A graduate of Vermont Academy, he received a B.A. degree journalism from Ohio Wesleyan University in 1975. He is the recipient of a Scripps Howard Foundation National Journalism Award in 1992 and a 1991-92 regional Emmy Award for commentary. He currently rides a 1987 BMW R 80 RT and a 2014 Triumph Bonneville and drives a 2010 Mazda MX-5 Miata and 2008 Ford Ranger pickup.
@https://twitter.com/ridect
Previous Bikes And Breakfast, Maryland Style
Next Safe Riding: Passing BRC Doesn’t Make One Road-Ready