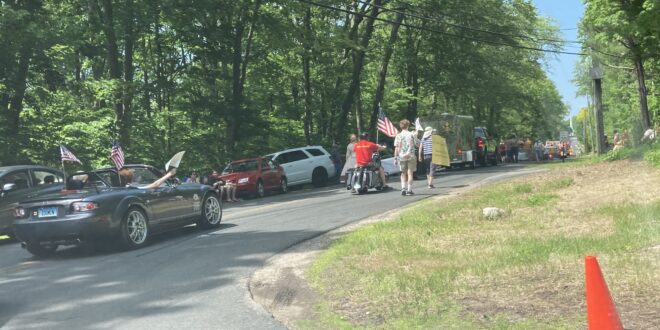 HARWINTON, CT – It was a good idea that had a bad outcome and involved a church and a motorcycle. The obnoxious stunt had spectators at a Memorial Day Parade here covering their ears in pain and disgust, and ultimately reflected negatively on a church that was simply trying to entice new parishioners.

The Harwinton Congregational Church is like many other churches across the country. Its membership is aging and shrinking, making for a future that looks dimmer than its past, which dates back to the mid-1700s.

The Idea Had Merit

Something more than giving away free hot dogs at the parade was needed, though. With Memorial Day approaching, and lacking the wherewithal to enter a float, a parishioner had the notion to “REV UP” attendance by having a banner in the parade that would be followed by a group of motorcycle riders.

The church member, who rides a presumably quiet BMW F 650 GS, contacted me a month ago and asked if maybe 10 riders could be found to ride in the parade. I pooh-poohed the idea out of the possibility of heat and safety concerns. As an alternative, I countered with a suggestion of assembling a small group of Mazda Miata sports car owners, who could then have church members ride along as passengers.

The idea was immediately okayed, except that she still wanted to have her cousin lead the group – on his Harley-Davidson with straight pipes.

That’s what happened on Monday and the experience was ear-shattering – rude, disrespectful and contrary to the meaning of the day. His aftermarket exhaust pipes were so loud as to awaken the dead who were being honored.

Too Much Noise From Start To Finish

The excessive noise began the moment the rider fired up his bike and continued throughout the slow-moving parade. Whenever he came to a group of spectators, he rolled on the throttle. Driving three cars behind him, it was difficult at times to converse with my passenger, Rev. Lisa Gustafson.

The racket was captured on video. At the end of it, you’ll notice a young boy covering his ears.

A post-parade text from one the Miata drivers behind the rider observed, “It was quite obnoxious and most people didn’t like it. They were holding their ears and shaking their heads.” My observation was identical. One spectator rolled their eyes as I drove by, and I nodded in agreement. One spectator later told me that folks along the parade route didn’t even realize the motorcycle and Miatas were part of the church’s entry.

As a longtime rider, my view is that those in the motorcycling community who have straight pipes and go out of the way to make noise give all motorcyclists a bad name. While straight pipes are banned in many locales, anti-noise laws are rarely enforced. This allows this selfish segment to continue their ill-mannered antics without caring who they might bother or offend.

No Scientific Need For Loud Pipes

Science to the contrary, the argument of the straight pipes crowd is that “straight pipes saves lives,” which is baloney. All loud pipes do is tick off others. Their claim is as valid as suggesting that climate change isn’t occurring or that COVID vaccinations don’t work or are injecting chips into our bodies.

Perhaps the most annoying aspect of the noise generated by the boor was the setting. Memorial Day is dedicated to remembering and thanking those who gave their lives for the country. It’s an occasion that demands solemnity and respect, not celebration. Being a jerk on a motorcycle is contrary to that. What some riders fail to acknowledge is that what they think is cool is hated by most others, especially those who don’t ride.

The Harwinton Congregational Church’s motorcycle stunt backfired big-time, although it could have worked. It just needed a rider with stock exhaust pipes and a lighter hand on the throttle. Unfortunately, the chosen rider created ill will toward the church.

The irony of the stunt is that the church, which sits across from the green on Route 4, is often victimized by excessive motorcycle noise on Sunday mornings. It’s especially bad when the windows are open. There can be an unending procession of loud pipes passing by. Rev. Gustafson said she’s even been forced to pause mid-sermon to wait for the noise to abate.

Bud Wilkinson writes the "RIDE-CT" motorcycle column and the "My Ride" classic car feature in the "Republican-American" newspaper in Waterbury, CT. A graduate of Vermont Academy, he received a B.A. degree journalism from Ohio Wesleyan University in 1975. He is the recipient of a Scripps Howard Foundation National Journalism Award in 1992 and a 1991-92 regional Emmy Award for commentary. He currently rides a 1987 BMW R 80 RT and a 2014 Triumph Bonneville and drives a 2010 Mazda MX-5 Miata and 2008 Ford Ranger pickup.
@https://twitter.com/ridect
Previous Henderson DeLuxe Stands Out As Only Bike At Car Show
Next Auction Planned For Hoellerich’s Trail Bike Museum Collection