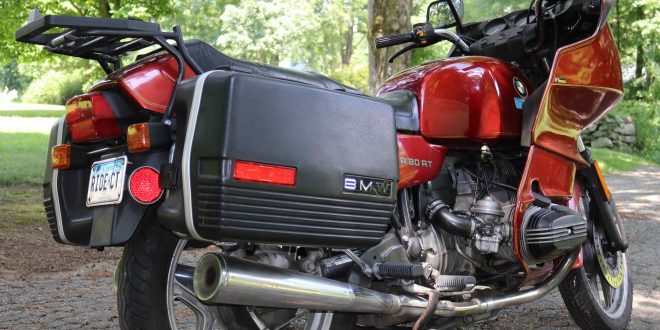 Own A Classic Bike Or Car? Better Check Your Tax Bill!

HARWINTON, CT – Are classic motorcycle (and car) owners in Connecticut routinely being ripped off through inflated property assessments; assessments that sidestep state law?

That seems to be the case, but there is a way to prevent being taken advantage of and save money: Check your tax bill closely before paying. Doing so just saved me $162.40. I know; that line sounds just like an insurance commercial.

It was in late June when the bills for real estate and motor vehicles arrived, and one line on the motor vehicle bill contained a shocking assessment. The well-used 1987 BMW R 80 RT that I acquired a year ago for $750 in non-running condition was valued at an eye-popping $6,300.

Having owned a few antique BMWs over the years and having a sense of the vintage Beemer market, I knew the assessment was far, far higher than what my bike is actually worth. An online check of NADA book value showed the model to be pegged at $630 in fair condition. Could an extra zero have been added to the assessment?

Even in excellent shape, NADA said the model was only worth $2,665. My R 80 RT is relatively OK. It has a bit of rust, some dings to the fairing, a damaged mirror that perhaps needs replacing, and a head gasket that weeps. By NADA’s reckoning, it’s probably worth $1,000, which admittedly is much less than what I could sell it for.

Kelley Blue Book, meanwhile, put the bike’s typical sales price at $3,320 in good condition. Old BMWs are becoming collectible, so the true market value for my R 80 RT is likely closer to Kelley’s number even in its fair condition. If I wanted to sell it – and I don’t – I might get $3,000 or a bit more.

The bike had been sitting for years when I bought it. Factor in the cost of new tires, battery, fluids, an instrument cluster rebuild, some tweaking by one mechanic, and a valve adjustment and some detective work for an electrical issue by another and I might be able to clear $200 or $300 if I sold it.

After stewing a bit over the bill, my plan was to visit the tax assessor’s office and see if the assessment could be lowered on the spot or whether I’d have to go before the Board of Assessment Appeals and beg for a reduction. I certainly didn’t want to pay $176.40 for a 32-year-old motorcycle.

Then I recalled what a friend from New Hartford had told me roughly a year ago. He said that on his town’s website (newhartfordct.gov) there’s a printable “Affidavit of Antique Motor Vehicle” form that can be filled out, notarized and turned in. The assessor then adjusts the assessment for the classic vehicle listed on the form to $500.

The form notes that a Connecticut statute states that any vehicle 20 years or older “shall not be assessed for more than $500.”

A little digging and I confirmed the law. Vehicles having classic license plates automatically get a $500 assessment. The law also says that those with non-classic plates may be “required by assessors to provide reasonable documentation” that their vehicle is an antique to get the $500 assessment.

My BMW has a regular plate, so no automatic $500 assessment. New Hartford requires that a form be filled be out. What would Harwinton need?

Other questions soon started popping into my head:

If I was ignorant of the $500 assessment limit might other classic vehicle owners be, too, and how many are unknowingly forking over too much every year?

Had I paid the tax bill without studying it would I have been the only sap?

Armed with my tax bill, I went to the assessor’s office and asked if the assessment for the BMW could be reduced. Voila! It was immediately slashed to the state limit of $500. I will now pay an even $14 for owning it. As previously noted, that’s a savings of $162.40.

Why the excessive and erroneous $6,300 assessment to start with? I was told at the assessor’s office that the state Department of Motor Vehicles, not the town assessor, determined the value. A check with the DMV revealed that it’s the state’s Office of Policy and Management that recommends values based on NADA guides, and that the DMV merely passes them on when providing a list of vehicles to every town.

So why was OPM’s assessment of my BMW more than double the NADA figures that I called up online?

Are Assessors Purposely Ripping Off Owners?

According to the DMV, “The authority to assess the value is under the jurisdiction of the town assessor,” which suggests that local assessors are perhaps knowingly engaging in a money grab; victimizing antique vehicle owners who don’t have classic plates and who don’t know the law.

To follow the law, assessors would have to go through the list of vehicles provided by the DMV, isolate antique vehicles with non-classic plates, and adjust each assessment to $500. Instead, they rely on owners to catch them overcharging and demand a fix.

At least New Hartford is transparent about the law, but how many other towns aren’t? How many are purposely cheating owners of classic vehicles through larcenous, over-stated assessments?

The lesson here is if you have an antique motorcycle (or car) that has a regular license plate be sure and check the assessment on your tax bill. It could be wildly incorrect. Even if it’s only modestly more than $500, challenging it should save you money.

As luck would have it, an actual victim soon presented himself. While out having lunch last Wednesday, I ran into Rich Hastings, a Harwinton motorcycle collector. He has a 1969 Triumph TR6C Trophy and a 1982 Honda GL1100 Gold Wing, both with regular plates. I mentioned to him the subject of this column. He replied that he’d just paid his taxes but would check his tax bill when he got home.

The phone rang a short time later. Hastings reported that the two bikes were assessed for $750 each. At the time, he planned to return to town hall and inquire why. That left me wondering how many more victims are there across Connecticut?

Monday afternoon, Hastings called again to report that he had visited town hall and was getting a $12 refund.

(A version of this column originally appeared in the “Republican-American” on July 27, 2019.)

Bud Wilkinson writes the "RIDE-CT" motorcycle column and the "My Ride" classic car feature in the "Republican-American" newspaper in Waterbury, CT. A graduate of Vermont Academy, he received a B.A. degree journalism from Ohio Wesleyan University in 1975. He is the recipient of a Scripps Howard Foundation National Journalism Award in 1992 and a 1991-92 regional Emmy Award for commentary. He currently rides a 1987 BMW R 80 RT and a 2014 Triumph Bonneville and drives a 2010 Mazda MX-5 Miata and 2008 Ford Ranger pickup.
@https://twitter.com/ridect
Previous Indian Day Attracts A Crowd Under Sunny Sky
Next “Ripple Relay” Shifts From New York To New England