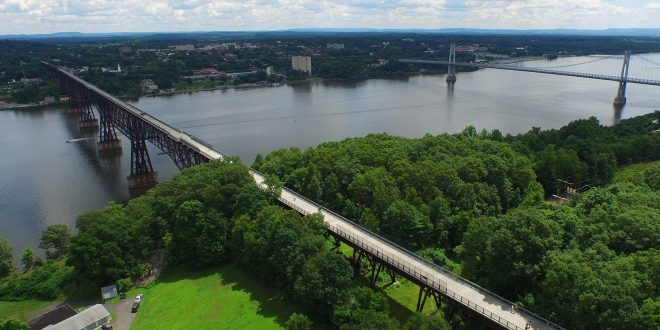 Walkway Over the Hudson Will Open To Motorcycles

POUGHKEEPSIE, NY – The Walkway Over the Hudson plans a limited-availability treat for motorcyclists on Aug. 24. The span will open for a one-time-only “SkyRide.”

The Walkway is the longest elevated pedestrian bridge in the world. It will be closed to the general public until noon that Saturday to allow for the motorcycle event, which is billed as being part of the Walkway’s ten-year anniversary celebration.

The SkyRide will be limited to 1,500 motorcycles. The cost is $40 per driver and $10 per passenger and participants may register in advance. Spectators tickets will cost $20 and will be capped at 400 people.

The Walkway Over the Hudson began as the Poughkeepsie-Highland Railroad Bridge, which opened in 1889. Besides allowing the transport of raw materials for industrial use in the region, passenger trains also used the bridge.

Until 1918, there were two sets of tracks. The bridge was painted black during World War II to make it less visible. On May 8, 1974, the tracks were destroyed by a fire that was likely started by sparks from a train’s brakes.

The walkway is 212 feet above the Hudson River. More than 500,000 visitors enjoy it annually.

An award-winning print and broadcast journalist, Bud Wilkinson writes the "RIDE-CT" motorcycle column and the "My Ride" vintage car feature for the "Republican-American" newspaper in Waterbury, CT. He studied journalism at Ohio Wesleyan University where he received a B.A. degree. He currently rides a 1987 BMW R 80 RT and a 2014 Triumph Bonneville.
Previous National Powersports Fined For Not Paying Overtime
Next Cost For Cops Puts End To Elm City Motorcycle Mania