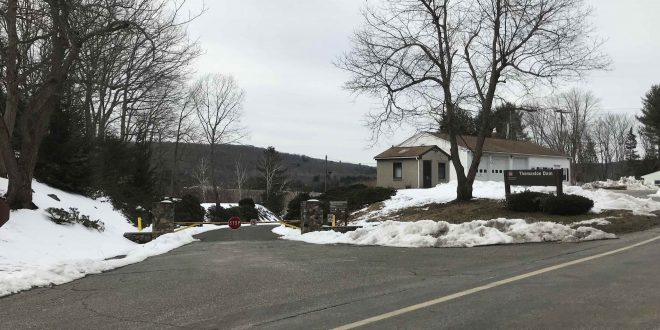 Dirt Riders Turn Out For Greenway Options At Thomaston Dam

THOMASTON, CT – Upwards of 150 worried dirt bike riders, fearful that a proposed “greenway” may disrupt or bring an end to more than 40 years of riding on trails behind Thomaston Dam, turned out for an occasionally-contentious informational public meeting at Center School on Thursday night.

“It’s the only legal place to ride a trail bike in Connecticut,” said NETRA president Tony Gasper of the existing area for off-highway vehicles before the start of the meeting. He added, “It’s very, very important to the hobby to keep our one legal place to ride.”

The meeting, held by the Naugatuck Valley Council of Governments, began with an overview of the planned greenway, which will stretch 44 miles along the river from Torrington to Derby. The section of concern to riders stretches from the dam northward into Harwinton and is mostly owned by the U.S. Army Corps of Engineers, which oversees the dirt-bike trails on the west side of the river and gets assistance from the Pathfinders Motorcycle Club in maintaining the popular area.

Proposed routes for the greenway are on the west side of the river – using the abandoned footprint of old Route 8 or a rail bed no longer in use – and on the east side. Options on the west side are not feasible from the perspective of riders. Gasper told planners it’s “not practical or safe for us to share” and that a west-side choice “would cripple the trail system.”

While the upsides of a west-side choice include existing infrastructure and a low or moderate cost, the preference of the U.S. Army Corps of Engineers is for the NRG to be located east of the river. “It would avoid potential conflict with OHVs and potential hunting,” said project manager Steve Patchkofsky, who said an estimated 29,500 riders use the trails at the dam annually.

However, he added that a visitor survey, which revealed that nine out of every 10 vehicles crossing the dam were involved with riding, could put the number of riders using the trails as high as 40,000.

Gasper said riders dump a sizable amount of money into Thomaston’s economy, stopping at gas stations, convenience stores and restaurants. He bottom-lined the situation saying placement of the NRG on the west side as being “bad for us, bad for you (the planners), bad for Thomaston.”

In showing off the proposed routes, Rick Dunne, executive director of NVCOG, described them as currently being “a bunch of lines on a map. It’s not a project.” He said, “The Corps will decide” which, if any, of the routes get chosen. Patchkofsky, though, said that “political influences could tell us otherwise. They can dictate what side it will go on.”

The challenges of an east-side route are a higher cost and the need to acquire or gain access to land belonging to eight private property owners between the meeting point of Valley Road and Wildcat Hill Road in Harwinton, south to where the Corps-owned land begins.

Also attending the meeting and being “strongly opposed” to any west-side route was Steve Salisbury, who is government safety manager (for) off-highway for the AMA in Washington D.C.

“They are listening to us. We have made an impression,” he told RIDE-CT & RIDE-NewEngland, stepping outside the school’s auditorium while the meeting was still in progress. He termed the building of the greenway a “long process and we need to be involved throughout.”

Gasper added, “It’s up to us to convince them that there’s a lot of lose for 26,000 dirt bike owners in Connecticut and the business owners of Thomaston.”

Also opposing a west-side NRG route was Jason Pinette, owner of Roost Powersports in Thomaston, which sells Husqvarna dirt bikes. “If this goes through, it will cripple me,” said Pinette, who raised his hand when audience members were asked how many in the crowd were concerned riders.

In opening the meeting, Thomaston First Selectman Ed Mone told audience members that no decision has been made regarding greenway routing and it may take “some time to get done.” During the meeting when one person in the audience became abusive, Mone stood up and quieted down the situation.

Additional informational public meetings are planned for 6 p.m. Wednesday at Town Hall in Harwinton and 6 p.m. Thursday at the Litchfield Community Center.

Harwinton’s role in the greenway could be crucial because of private property that’s involved in the east-side route. Harwinton First Selectman Mike Criss was traveling to Hartford to testify at the General Assembly at midday Friday and couldn’t be reached immediately for comment.

Bud Wilkinson writes the "RIDE-CT" motorcycle column and the "My Ride" classic car feature in the "Republican-American" newspaper in Waterbury, CT. A prep school graduate of Vermont Academy, he received a B.A. degree journalism from Ohio Wesleyan University in 1975. He is the recipient of a Scripps Howard Foundation National Journalism Award in 1992 and a 1991-92 regional Emmy Award for commentary. He currently rides a 1987 BMW R 80 RT and a 2014 Triumph Bonneville.
Previous New Zero SR/F Model Undercuts LiveWire By One-Third
Next Dealer Perspective: Off-Season Woes