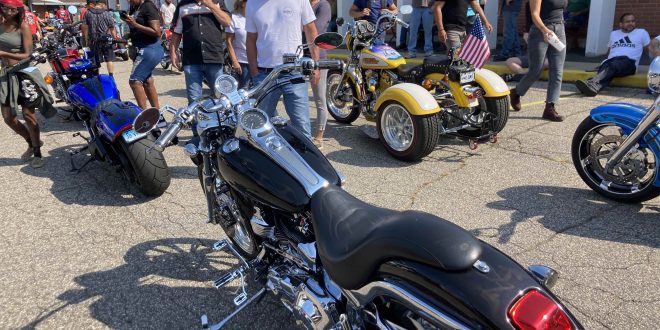 WATERBURY, CT – After an absence of two years because of the COVID-19 pandemic, Doc’s Motorcycle Parts revived its annual customer appreciation day and bike show on Sunday, drawing hundred of riders who came to enjoy a variety of noteworthy models and to stroll in the sunshine and scarf free hot dogs.

The parking lot was awash with color as customized and restored model dominated the show entries. While there were many vintage Harley-Davidsons, models from Europe (notably England and Germany) and Japan could also be seen.

“We haven’t had any events for two years. Great to be back, great turnout,” said D’Occhio, who said spectators were unnecessarily thanking him for bringing back the show after skipping 2020 and 2021. “This is customer day. We’re thanking them.”

Rich Nelson of Bantam rode in on a peacock blue 1949 Harley-Davidson Panhead that he’s just spent months restoring. “All original sheet metal,” said Nelson, who disclosed it was “boxes of parts” when he initially acquired it. He rode it for a while before tackling the do-over.

Nelson had only gotten the Panhead on the road the day before. “I had it apart for about a year,” he said, reporting that an oil leak and a faulty rear brake had to be dealt with before he was able to ride it to Waterbury.

With Thomaston Avenue lined with bikes for much of the day and the parking lot filled with folks inspecting the show entries, it’s safe to say there was a pent-up demand for the show staged by Doc’s – even it meant D’Occhio had to sometimes engage in janitorial duty by taking out the garbage.

Bud Wilkinson writes the "RIDE-CT" motorcycle column and the "My Ride" classic car feature in the "Republican-American" newspaper in Waterbury, CT. A graduate of Vermont Academy, he received a B.A. degree journalism from Ohio Wesleyan University in 1975. He is the recipient of a Scripps Howard Foundation National Journalism Award in 1992 and a 1991-92 regional Emmy Award for commentary. He currently rides a 1987 BMW R 80 RT and a 2014 Triumph Bonneville and drives a 2010 Mazda MX-5 Miata and 2008 Ford Ranger pickup.
@https://twitter.com/ridect
Previous Honda Commits To At Least 10 Electric Models By 2025
Next KTM To Help Raise MV Agusta’s Profile In North America