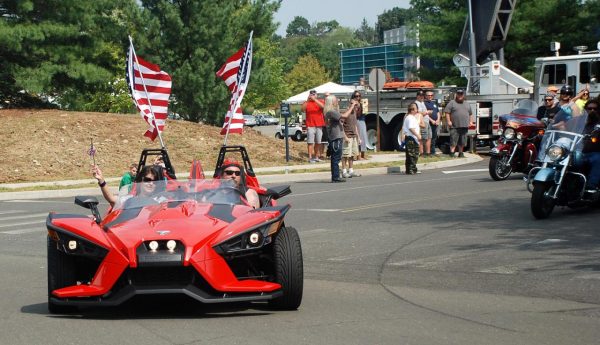 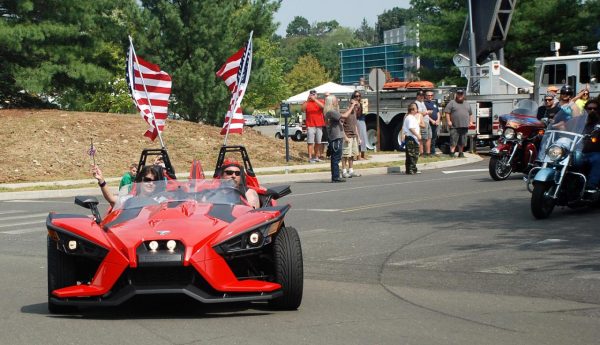 NEW HAVEN – The CT United Ride, which bills itself as “CT’s largest annual 9/11 tribute,” is being lambasted today by a local motorcycle dealer and by Slingshot owners who charge discrimination in the treatment of a group that wanted to participate in the 15th annual

charity ride on Sunday that attracted 2,500 riders from 12 states.

“We drove in and we got belittled,” said an unhappy George Libby, president of Libby’s Motoworld, the Honda, Triumph, Yamaha, Victory and Slingshot dealer in New Haven. “It left a bad taste in my mouth.”

“It was very upsetting,” said Slingshot owner Tony Zullo of New Haven, saying a group of 20 Slingshot owners were “treated like shit” by the event’s organizers.  “They threw away over $2,000 in donations. It’s unbelievable – the narrow-mindedness, and being rude on top of it.”

The event’s organizer, Frederick Garrity Jr., this afternoon countered that the furor was solely caused by the Slingshot contingent, which was “unbelievably belligerent.” He described Zullo as “the perpetrator of the ugliness” and maintained that he tried to work a compromise, with the Slingshots assigned to the rear of the ride.

“I tried to resolve it amicably,” said Garrity, adding that he was blindsided just as the pre-ride program was about to start. “Yes, I was upset because they made the day about them, instead of the event,” which honors those who lost their lives on 9/11 and police and firefighters who still place their lives on the line.

Both sides agree that the situation got heated.

Libby reported that when the Slingshot owners arrived at the Norwalk gathering spot on Sunday morning, they were told, “We don’t want those ‘Bat-cars’ in the place ” – despite Slingshots being allowed to participate in the past. “This was in front of thousands of people. This is supposed to be a tribute to 9/11 – not who can ride and who can’t. I was embarrassed,” Libby said.

Zullo, who bought a Slingshot after suffering injuries in motorcycle and car accidents, said he has participated in in the CT United Ride every year since the inaugural event in 2001 and brought his Slingshot to the CT United Ride in 2015 without an incident. “There was no problem. Nobody said a word,” he recalled. The CT United Ride’s website even displays pictures of Zullo and another Slingshot owner participating a year ago.

However, on Sunday, Zullo reported, “This guy comes running over and say, ‘You’re not allowed here.'” Zullo said he explained that a Slingshot is classified by the state as an “autocycle” and has a motorcycle license plate. “He said, ‘I’m not going to argue the point with you.'”

Zullo said he eventually worked his way up the chain of command to Garrity, who reiterated the event’s position. Zullo said he again tried to explain why Slingshots should be allowed; that many owners are motorcycle riders who are no longer able to stay up on two wheels, and that a prohibition would be discriminatory.

“He got mad at me because I was arguing with him (and said) he’s going to call the state police and have me removed,” said Zullo, adding that Garrity also told him that some towns asked him not to allow Slingshots to participate. He added that Garrity wouldn’t reveal the names of those towns. The ride went through Norwalk, Westport, Wilton, Georgetown, Redding, Bethel, Newtown, Monroe, Trumbull and Fairfield before ending in Bridgeport.

Garrity confirmed that he did threaten to have Zullo removed by state police because the Slingshot owner was “screaming at me.”

Garrity explained that the CT United Ride requires permits from the towns involved. “We are permitted and insured as a motorcycle event,” he said, and Slingshots are “clearly not motorcycles.” Slingshots have a motorcycle license plate but operators do not need an “M” endorsement on the driver’s licenses to drive them.

Like a car, Slingshots have side-by-side bucket seats, a shifter inside a middle console, a steering wheel, and a foot clutch. They have two wheels in front and one in the rear. “What some people consider a motorcycle is blurred. They are not classified as a motorcycle,” Garrity said.

Having Slingshots becomes problematic, he continued, because their size prohibits them riding from side by side as motorcycles do. “They are dangerous in these kinds of situations,” Garrity said.

Recalling the 2015 ride, he said two Slingshots did manage to get in line and it was “too late” to remove them. Police cadets direct incoming participants. Once the brouhaha developed, Garrity said he told the Slingshot operators “I will meet you halfway” by letting them ring up the rear. “That’s not enough, Zully said,” according to Garrity.

“To bar Slingshots is just ridiculous,” said Zullo. “It’s a narrow-minded society again. If you have something different, you’re an outcast.” 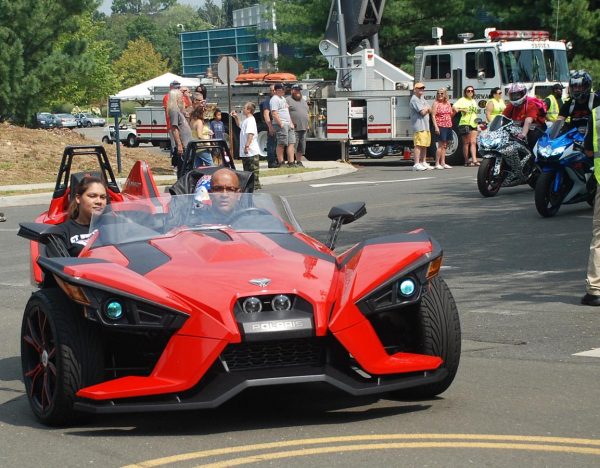 Libby  and Zullo also noted that scooters and other three-wheelers, including V8-powered trikes with what Libby called “huge engines twice the size of the Slingshot,” were welcomed.

Libby’s Motoworld promoted the CT United Ride on its website for weeks in advance of the event, inviting Slingshot owners to join and help raise money for firefighters and law enforcement personnel in the state as well as for two local United Ways. “Libby’s is not a sponsor or promoter of the event,” said Garrity, who promised that the Slingshot situation will be reviewed before the CT United Ride is staged in 2017 and that a disclaimer will be posted.

“Sometimes you can’t think of things until they happen. I try to please everyone; try to make it a success,” he said.

Since 2010, RIDE-CT & RIDE-NewEngland has been reporting about motorcycling in New England and portions of New York.
Previous Fiery Start To Motorcycle Cannonball
Next Big Ratings For “Harley” Miniseries