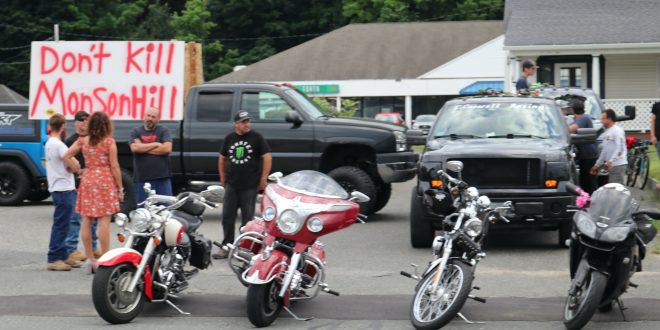 MONSON, MA – A Zoning Board of Appeals hearing scheduled to potentially determine the future of hillclimb events staged on land owned by the Quaboag Riders Motorcycle Club was short-lived Thursday night when the inadequate size of the meeting room forced a postponement until July 14.

State law requires that open meetings be accessible to all those interested. A sizable crowd of club members and other motorcyclists who rode to Monson Town Hall to protest a cease and desist order that has prohibited hillclimbs so far this year made it impossible for the hearing to be held.

“The whole thing is the open meetings law,” said Zoning Board of Appeals chairman David Beaudoin. A motion to postpone the hearing until 7 p.m. on July 14 at nearby Memorial Hall, which can hold more than 200 people, was soon passed.

While the booking calendar for Memorial Hall was being located elsewhere in the building prior to the vote, the loud sounds of motorcycle exhaust pipes being revved outside the hearing room could be heard. “Please tell those guys out there not to do that,” said Beaudoin, his comment directed at Quaboag Riders leaders inside the hearing room.

Beaudoin then added that if action wasn’t immediately taken to quell the noise, “You may not like what I have to do.”

While no official tally was taken of crowd size, easily more than 100 riders showed up to protest the shutdown of hillclimbs, which have been staged at the “Monson Monster” since 1945. Many other supporters came in cars and trucks bearing signs of support.

Quaboag Riders president Bill O’Donnell was philosophical after the hearing. “At least we got a bigger room, a bigger venue to deal with it,” he said.

The cease and desist order from the town was issued back in March and focused on the use of the 80-acre property owned by Quaboag Riders and improper changes that have allegedly been made. While declining to disclose his strategy for fighting the order, Nicholas D. Amanti of Fitzgerald Law who is representing the club, stated, “It’s a grandfathered piece of property. There’s been no change.”

Prior to the hearing, Beaudoin spoke with some of the protesters in front of town hall, but when RIDE-CT & RIDE-New England approached and asked if he’d answer some questions, he replied rather angrily, “No.”

Among those protesting the shutdown of hillclimbs were members of the Quaboag Riders Motorcycle Club and other riders from elsewhere, including Connecticut, who were led by New England Motorcycle Museum founder Ken Kaplan.

The Quaboag Riders Motorcycle Club was founded in 1944, primarily by World War II veterans who worked for the Indian motorcycle factory in Springfield. Hillclimbs have been staged behind their clubhouse on what is now the south edge of downtown Monson for 77 years.

Hello! If you found this story newsworthy, please share it with other riders by clicking on the social media button below.

Bud Wilkinson writes the "RIDE-CT" motorcycle column and the "My Ride" classic car feature in the "Republican-American" newspaper in Waterbury, CT. A graduate of Vermont Academy, he received a B.A. degree journalism from Ohio Wesleyan University in 1975. He is the recipient of a Scripps Howard Foundation National Journalism Award in 1992 and a 1991-92 regional Emmy Award for commentary. He currently rides a 1987 BMW R 80 RT and a 2014 Triumph Bonneville and drives a 2010 Mazda MX-5 Miata and 2008 Ford Ranger pickup.
@https://twitter.com/ridect
Previous A Tip If Your Battery Tender Goes Haywire
Next FTC Acts Against Harley-Davidson On Warranty Restrictions