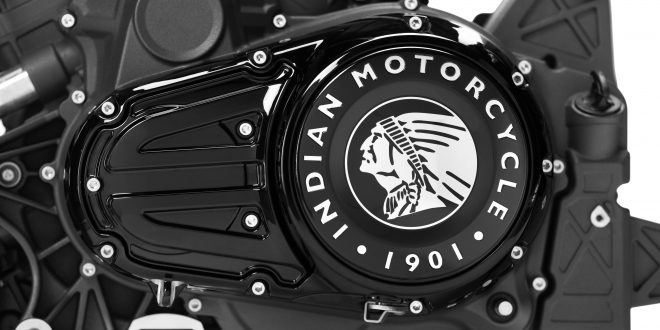 The liquid-cooled PowerPlus engine, named after the Indian model that the original company built between 1916 and 1924, will deliver 122 horsepower and 128 foot-pounds of torque.

The PowerPlus motor will be used in the as-yet-unrevealed Challenger model, which is expected to be a fixed-fairing bagger. It will have a six-speed transmission with “true overdrive” and three ride modes.

“We challenge our engineers with the notion that anything less than best-in-class design and performance will simply not get it done, and it’s clear with this new engine that they have delivered on this high standard,” said Steve Menneto, Indian’s president.

The PowerPlus will be assembled in Osceola, WI, with final assembly of the Challenger taking place in Spirit Lake, IA. Indian said the new motor went through nearly one million miles of simulated testing and more than 250,000 on-road miles.

Indian dealers were told of the upcoming Challenger model at their annual meeting in July. Since then, the company has released details of its Scout model lineup for 2020, apparently sneaking a picture of the forthcoming Challenger into one shot with a 2020 Indian Scout Bobber Twenty – at least when the lineup was announced in Canada. Give credit to Canada Moto Guide for spotting it.

Indian is expected to unveil the Challenger on Oct. 29.

An award-winning print and broadcast journalist, Bud Wilkinson writes the "RIDE-CT" motorcycle column and the "My Ride" vintage car feature for the "Republican-American" newspaper in Waterbury, CT. He studied journalism at Ohio Wesleyan University where he received a B.A. degree. He currently rides a 1987 BMW R 80 RT and a 2014 Triumph Bonneville.
Previous Bemer Arrested For Domestic Incident, Stores Losing Brands
Next Harley-Davidson Sales Dip Again In Third Quarter