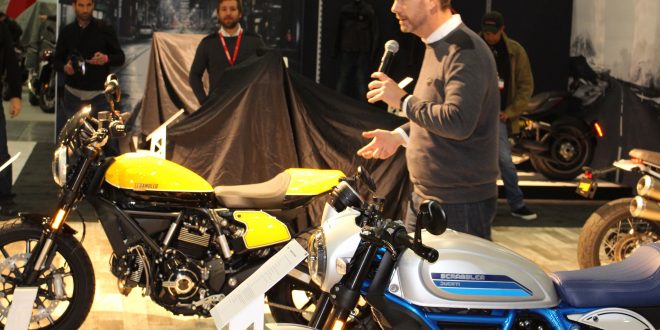 Share
One of the more limiting phrases in our language is “That’s the way we’ve always done it.” It snuffs out any possibility of change, much less innovation or improvement. While the motorcycle industry isn’t exactly circling the drain (yet), it is faced with the challenge of finding customers as baby boomers age out /die

off and younger riders don’t replace them.

You’d think that the industry would galvanize, step up and fight back against eroding popularity. Instead, there’s been a lethargic, status quo response. Yes, there are an increasing number of fresh and smaller models aimed at new, more youthful and urban dwellers, but there has been no “big picture” effort.

The CEOs of the major manufacturers continue to draw huge salaries and bonuses, so presumably do the long-ensconced executives at industry organizations like the American Motorcyclist Association or the Motorcycle Industry Council. This leaves the impression that they’ve “got theirs” and the heck with the industry’s future. The “same old, same old” works for them.

Remember the “You meet the nicest people on a Honda” advertising campaign from the 1960s? It single-handedly changed the public’s perception of motorcycles and riders. Recall the more recent “Got milk?” campaign? It, too, was a broad welcoming effort that invited action by everyone.

So why are industry leaders missing in action in kick-starting motorcycling?

At the recent Progressive International Motorcycle Show in New York, RIDE-CT talked with two men who actually have the ability bring about change – public relations specialist Robert Pandya and Ducati executive Jason Chinnock – about the current situation and what needs to be done to raise motorcycling’s profile.

Pandya is the owner of SpokesPeople, LLC. He previously was company spokesman for Indian and the now-defunct Victory brand. Pandya was at the IMS staging a participatory exhibit called “Discover the Ride.” Working with Zero Motorcycles, he coaxed non-riders to learn about motorcycling aboard detuned electric Zero models.

So why has the industry done such a poor job in self-promotion?

“Sometimes we live in the forest too much. We’re always around ourselves. We’re always around people who know motorcycling. Really the challenge of the industry to get new riders in is to get out of our world; to really understand what it is that new riders need,” said Pandya, explaining that sometimes it can come down to something as basic as sharing in which direction a bike’s throttle needs to be turned to take off.

Riding can be scary and intimidating to the uninitiated. But before fears can be quelled, the industry must admit that a problem exists. “I think there are parts of this industry that have seen that there are certainly problems or gaps within how we’re addressing the public out there. Motorcycle manufacturers, by and large, really focus in on product. It’s their job to sell nuts and bolts and products. That’s what they do,” said Pandya.

For the industry to rebound, it will take more than product. “The reality for a brand to win is to sell heart and soul and to tell a story. This is a very human endeavor that we do. It’s the reason that motorcyclists are such an amazing community is because you connect on a human level,” Pandya continued.

Chinnock, meanwhile, is CEO of Ducati North America. He, too, sees a need to get non-riders enthused. “It’s our responsibility to not only bring product to market but to point people in the direction of the tools that they have in order to learn how to ride,” he said.

Ducati has a wide product range and a wide range of MSRPs. “Our approach has actually been less focusing on any sort of age group or specific demographic and more about people that actually have something that’s in them. That’s the spirit of adventure that actually makes you want a motorcycle,” Chinnock said.

“There’s a spirit that’s within people that doesn’t matter their age that maybe needs to be awoken,” he said, noting that after his mother passed away his father took up riding. “I believe that motorcycling has an opportunity to grow by finding a way to ignite that with people, regardless of age and demographics.

“We are not in the transportation business,” he said, reaching down to touch a Scrambler model on display in the Ducati exhibit. “This is not transportation. This is entertainment. What we’re fighting for, challenging if you will, (is) what they’re doing with their discretionary spending and their time.”

Part of the industry’s decline is self-inflicted. It focused for so many years by selling huge cruisers to baby boomers, ignoring Gen Xers and their offspring, who, Pandya said, were given a “screen as a pacifier” and consequently never adopted riding, either.

“The real opportunity for this industry right now to replace baby boomers is to market to Generation X because all of a sudden we have a whole generation, they’re free again. Kids are out and they’re looking for the next thing,” Pandya said, who retains some optimism for the future.

Too bad so few entrenched industry leaders buy in.

(This column originally appeared in the “Republican-American” on Dec. 15, 2018.)