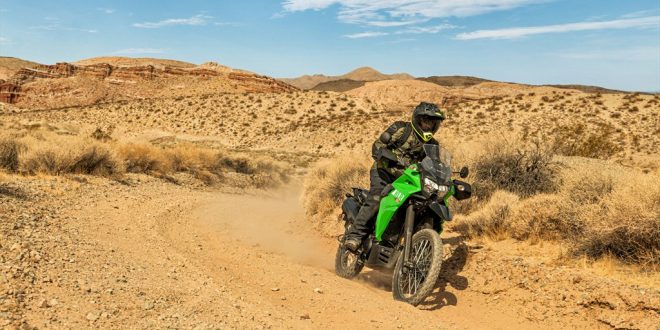 Oil Drippings: Hey, Kawasaki, What Took You So Long?

It’s a long overdue fresh edition of Oil Drippings. It’s the catch-all column of recent news items from near and far that maybe don’t warrant a full post or somehow fell through the cracks. Here goes:

The model has been around for 35 years and is currently on its third generation. It’s been dependable, versatile and affordable, yet so many riders have rejected it because of its seat height. It’s the single-cylinder Kawasaki KLR650 dual-sport.

The current generation has a 35-inch seat height, which prevents anyone standing, say, 5’10” or less from attempting to ride it, at least without modifications. Until now.

In unveiling its 2023 model lineup this week, Kawasaki introduced a new KLR650 S variant (pictured below and at top) with 32.7-inch seat height. The “S” model has lower front and rear suspension, a lower seat, and a shorter side stand, making it much more accessible to many more riders.

Other modifications include an increase in the space between the shifter and the footpeg and adjustable handlebar and footpeg positions.

The base MSRP is $6,899 with an ABS version going for $7,199. The base model comes in candy lime green and pearl storm gray, while the ABS will only be available in gray.

Obituaries this week for country music legend and coal miner’s daughter Loretta Lynn routinely mentioned that she was an inductee into the Country Music Hall of Fame (1988). She’s also in the Songwriters Hall of Fame (2008). However, it’s safe to say they overlooked one other honor that connects her to motorcycling.

A lot has been written, at least here, about the status of Gold Coast Motorsports, the BMW-Ducati dealer in New Hyde Park on Long Island. It has been a sparsely stocked and sparsely staffed store for quite some time, and closure has appeared imminent.

There have recently been some hints that a “crazy” sale of the store is in the works, with a possible closing weeks away. The latest sign that something is up can be seen – or, more accurately, not seen – online. The store’s website has been taken down.

BRP has announced that ground was broken this week in Querétaro, Mexico on a new factory that will build Can-Am’s upcoming electric motorcycle models. The Can-Am Origin and the Can-Am Pulse will be built at the factory that will be adjacent to BRP’s campus.

Production is expected to begin n March 2024. The electric models are due to arrive in dealer showrooms in summer 2024.

Bud Wilkinson writes the "RIDE-CT" motorcycle column and the "My Ride" classic car feature in the "Republican-American" newspaper in Waterbury, CT. A graduate of Vermont Academy, he received a B.A. degree journalism from Ohio Wesleyan University in 1975. He is the recipient of a Scripps Howard Foundation National Journalism Award in 1992 and a 1991-92 regional Emmy Award for commentary. He currently rides a 1987 BMW R 80 RT and a 2014 Triumph Bonneville and drives a 2010 Mazda MX-5 Miata and 2008 Ford Ranger pickup.
@https://twitter.com/ridect
Previous Bookshelf: “Complete Book of Ducati Motorcycles” Gets Updated
Next CPTV Airs “Motorcycle Man” Documentary On Dave Roper