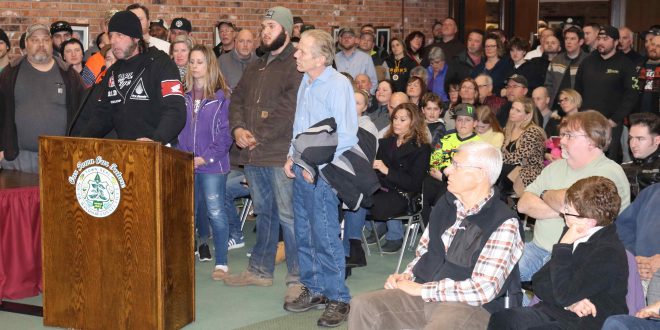 South Windsor’s Mayor Had A Legitimate Point On Noise

SOUTH WINDSOR, CT – What transpired at a town council meeting in South Windsor last week is worth noting and remembering for the lessons it provided. It also needs to be noted that the meeting failed to address the underlying problem that brought a mob to Town Hall – excessive noise from motorcycles and other motorized vehicles.

In this case, it was the sound of dirt bikes, quads and other gas-powered conveyances that had South Windsor’s mayor, Andrew Paterna, wondering if a governmental remedy might be necessary.

However, excessive noise can be heard in any town and city in the state, most often from aftermarket exhaust pipes. The din routinely disturbs church services on sunny Sunday mornings in summer and exasperates homeowners along state roads who yearn for some peace and quiet.

In South Windsor, the mayor had floated the idea of a nuisance ordinance to curtail selfish operators, with potentially costly penalties for offenders. As a starting point for discussion, he used an East Hartford ordinance as a template.

The mayor was simply using East Hartford’s ordinance as an example, but the blowback was immediate, predictable and fierce. The riding community rose up in opposition. Hundreds showed up at the town council meeting last Monday night to protest, urged on by New England Motorcycle Museum owner Ken Kaplan.

Over the preceding weekend, Kaplan used social media to rally riders. In doing so, he preempted the normal governmental process. A proposed ordinance hadn’t even been drafted, much less introduced. In presenting a call to action via social media, though, Kaplan misleadingly suggested that punitive measures were practically a done deal.

Tactically, it was an effective strategy, but one that created fervor among those opposed to governmental action.

Standing in the chamber and watching as person after person vented, some saying an ordinance would be  “un-American” because citizens should be allowed to do what they darn well please on their own property, with others noting that dirt bikes and quads get their kids outside, off their cell phones and teach them responsibility, I had three reactions:

One, a bit of admiration for the passion of the people, and respect for the way they presented their arguments in a civil manner. In these extremely polarizing times where the “other side” is automatically evil and wrong-headed, it was pleasant to witness the polite conduct.

Two, a bit of astonishment that some speakers had foresight and went beyond any potential ordinance and suggested the kerfuffle could be used as a springboard for public riding areas that could and should be explored and developed.

And, three, a bit of dismay that the legitimate issue of excessive noise was thoroughly overlooked by those involved.

I live in a country town. A few years ago, some folks moved into a house up the street. They had a teenager who quickly built a short, circuitous trail on the property for riding his dirt bike. He used the track quite a bit; after school and on weekends, but never at odd hours. He never caused a disturbance and no one to my knowledge ever complained.

Down the street, meanwhile, another family moved into another house, bringing noisy dirt bikes and quads. That property became “Noise Central” at all hours and for long durations. Even three houses away, with the windows open, the roar has been at times overpowering and offensive, and disrespectful of everyone else in the neighborhood.

Being a country dweller, I’m used to the intermittent sound of chain saws, log splitters, riding lawn mowers, and leaf blowers. There’s a huge difference between occasionally being disturbed and inconvenienced and being blasted.

Don’t Homeowners Have Rights, Too?

What right does any rider – even on private property – have to disrupt the peace of others nearby? As much as I respect the passion of those who showed up at the meeting in South Windsor, I’m willing to bet that a few of those speaking have been selfish offenders themselves in the past.

So, while Kaplan deserves and received credit from his overflow crowd of disciples for getting ahead of what might have become an overenthusiastic ordinance, here’s some credit for Paterna for trying to bring some governmental attention to a problem that affects everyone – noise pollution.

The mayor may have overreached by circulating the East Hartford ordinance, but his intuition was spot-on. If riders cannot police themselves and show some courtesy, the government must sometimes step in for the benefit of others.

Maybe the answers are simply enforcing of existing noise ordinances. That and coming up with public places for off-road enthusiasts to ride.

Offending Riders Should Be Punished

As a rider and homeowner, I’m all-in on punishing those who ruin the tranquility of neighborhoods with excessive noise. Shouldn’t I have the “freedom” to enjoy my property without someone else’s noise intruding and ruining the atmosphere?

That issue got lost in South Windsor last Monday night. The lessons learned were that, yes, we can actually be cordial and respectful in this polarized nation; that it is possible to look beyond the immediate dispute and seek solutions; and that it’s also important to confront the underlying issue instead of simply railing.

Every rider has a stake in the noise issue because offenders make us all look bad. Every rider should look inward and ask, “Am I really being a good neighbor by rattling windows?”

(A version of this column was originally published in the “Republican-American” on Feb. 8, 2020.)

Bud Wilkinson writes the "RIDE-CT" motorcycle column and the "My Ride" classic car feature in the "Republican-American" newspaper in Waterbury, CT. A prep school graduate of Vermont Academy, he received a B.A. degree journalism from Ohio Wesleyan University in 1975. He is the recipient of a Scripps Howard Foundation National Journalism Award in 1992 and a 1991-92 regional Emmy Award for commentary. He currently rides a 1987 BMW R 80 RT and a 2014 Triumph Bonneville and drives a 2010 Mazda MX-5 Miata and 2008 Ford Ranger pickup.
@https://twitter.com/ridect
Previous The Week In Review – Feb. 8
Next Registrations, CONREP Enrollment Down In CT