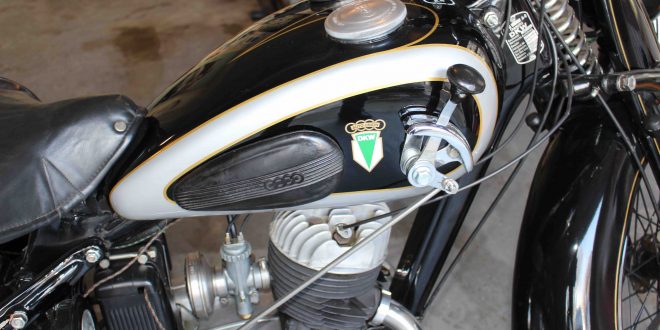 WOODBURY, CT – Look closely at Carl Moeller’s 1939 DKW NZ 250 motorcycle and a familiar automotive logo can be spied. It appears in the decals on either side of the gas tank, in the badge above the handlebars, and is even incorporated into the rubber knee pads on the gas

The logo consists of four interlinked rings and dates back to the 1930s and the Depression when four companies in Germany merged to form Auto Union. The companies were DKW, Horch, Wanderer and Audi, which uses the distinctive four-ring logo on its cars to this day.

Moeller, who lives in Woodbury, got the NZ 250 five years ago out of Georgia. “I was told it’s ready to go, it’s perfect,” he said. That wasn’t exactly true. The speedometer was wrong. The light switch was wrong. Same with the decompression lever.

Fortunately, Moeller has relatives in Germany who helped ship him the parts after he sourced them on Ebay. “Everything had to come out of Germany. It took me three or four years to get it to where it is now. Everything is pretty much as it looked as it came out of the factory,” he said.

“I was a World War II buff. I actually taught courses. I was always interested in history and I was interested in motorcycles,” said Moeller, who is a physical education teacher in the Weston public school system.

Germany used motorcycles more extensively during World War II than the Allies. “The U.S. just used them for MP duties, reconnaissance duties. The Germans actually went into combat with them,” he said. BMW’s larger, heavier bikes may have been preferred but DKW’s NZ 350 model, which succeeded the NZ 250 in 1940, was used by dispatch riders.

Moeller’s other DKW is actually an MZ. After the war and the division of Germany, the factory in East Germany took the MZ name, while the plans for the RT 125 model got passed to Harley-Davidson in the U.S. and BSA in the U.K. as reparations. Harley-Davidson produced a version called the Hummer, while BSA came out with the Bantam.

“It’s the most copied bike in the world,” said Moeller, adding that it was frequently used as a messenger bike as well during the war. 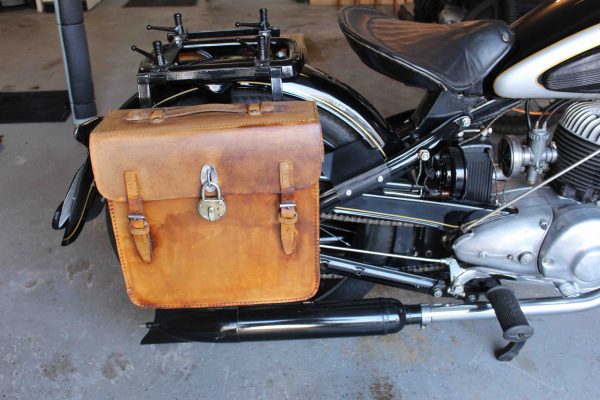 It’s the NZ 250, though, that’s the standout in Moeller’s collection. With a solo seat and tan leather saddlebags, it looks ready to be used by a messenger as well. One noteworthy feature is that it has both a foot shifter and a hand shifter. “You have a choice,” Moeller said.

With retirement on the horizon, and plans to move to Wyoming already in the works, Moeller wants to sell the NZ 250. It is listed on Facebook’s marketplace with a $16,000 asking price. On Facebook, he’s shown as Carl Möller. He joked that he uses the conventional German spelling of his surname on social media to prevent any long ago girl friends from discovering his whereabouts.

“I‘m selling it because I’m downsizing. The bike belongs in a museum or with someone who has a collection,” Moeller said. “To my knowledge, it might be the only one in that condition in the country.”

While the DKW brand may be obscure today, DKW was the largest producer of motorcycles in world in the late 1920s and 1930s, building 65 percent of the motorcycles built in Germany.