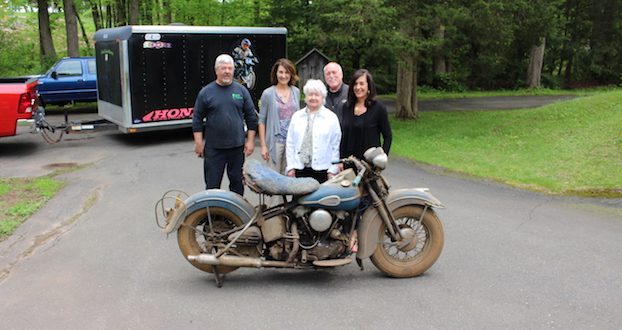 May 21, 2018 Comments Off on Updated: Knucklehead Treasure Finally Sold

UPDATED – June 25, 2018: After being worked on for a month and being put back in running order by the buyer’s mechanic, the 1941 Harley-Davidson FL was brought back to the home of seller Jane Sheridan on Sunday so she could see it running after 61 years of sitting. She took the opportunity to pose on the Knucklehead. 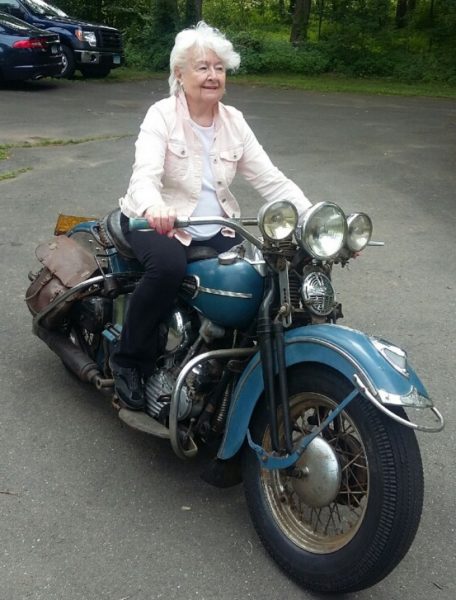 SUFFIELD, CT – A 1941 Harley-Davidson FL “Knucklehead” that has been sitting in a basement here for at least 50 years has finally been sold for $75,000, with the buyer vowing to spend thousands more to get it back to original shape and running again within weeks. “I thought

sitting in the cellar nobody would want it because it was too dirty,” said seller Jane Sheridan of the bike that belonged to her late husband, Donald, who passed away in late December.

A license plate on the FL showed that it had last been registered in Connecticut in 1954. The Sheridans moved into the house where the bike was housed in 1957, suggesting that the bike may not have seen sunshine for 61 years. 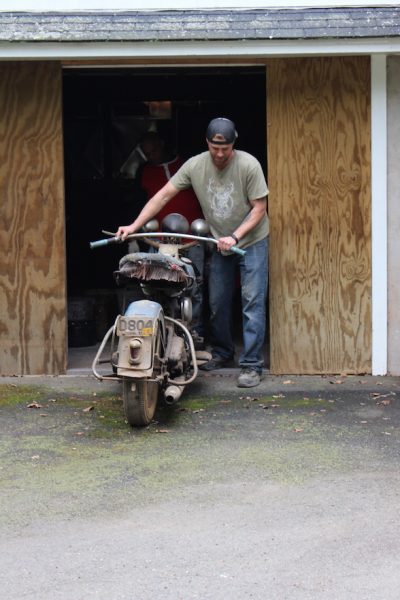 “I’m sad,” said Sheridan as the valuable relic was being taken away Thursday afternoon. “It was part of my life, too. I know it’s going to be taken good care of.”

The new owner is a private collector from New York City who requested that his name not be revealed, although he did allow for pictures to be taken. “I can’t get over the condition of the paint,” he said after the Knucklehead was rolled outside the basement. “It’s almost as if the dust preserved it. The dust saved it.”

RIDE-CT & RIDE-NewEngland first reported on the Knucklehead back in March, but withheld the seller’s name and the bike’s location at the request of the family. But with the buyer’s arrival along with a trailer, a fuller story can now be told.

The bike was originally owned by a cop who lived in Agawam, MA. Sheridan most likely bought it in 1951 when he was 18. It has a 74-cubic-inch V-twin engine, “squashed bird” emblems atop the fenders and more than 35,000 miles on the odometer.

“The bike deserves the attention it should get,” said the buyer, who already owns numerous other Harley-Davdisons from the 1930s and 1940s. He uses a mechanic near Bradley International Airport who specializes in such vintage machines to get and keep them running, and to restore them.

“The bike is absolutely incredible. You’ll be amazed when you see what he does with it in the next two weeks,” said the buyer referring to his restoration expert. The ’41 Knucklehead will not be restored, though, but non-original parts will be replaced and it will become operational again.

The seller texted Sunday night to say a correct muffler for the FL had just been found and purchased on eBay for $3,716. 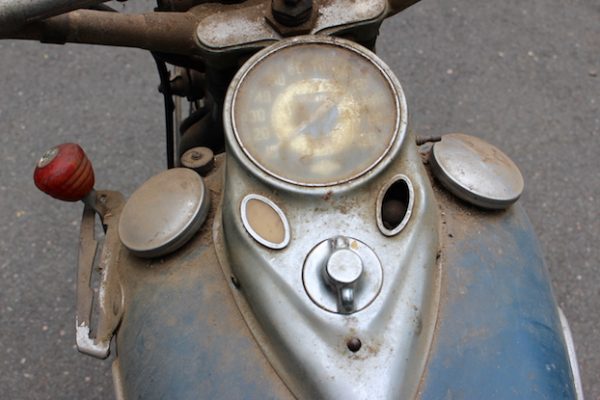 The bike may now be in a non-descript shop in Windsor being worked on, but memories remain for members of the Sheridan family. “We used to ride that all the time, my husband and I, when we were young. I was a little too wild back then,” said Sheridan. One of her daughters, Karen Dardanelli of Suffield, recalled begging for rides on the bike before bedtime when she was a child.

Once the bike is ready, the new owner plans to have the bike ridden back over to Sheridan’s house so that she can hear what it sounds like again and see what’s been done on the motorcycle. 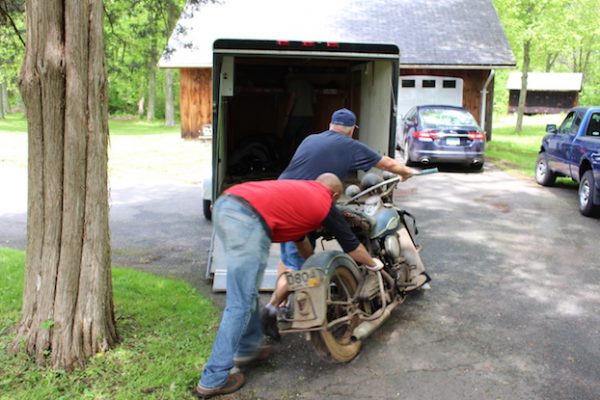 The sale of the Knucklehead ends a complicated story that began when RIDE-CT & RIDE-NewEngland brought antique Harley-Davidson expert and Motorcyclepedia Museum president Dan Henke to Sheridan’s house to assess the bike.

Within days, it became public that Henke was on the losing end of a civil lawsuit in which a judge in New York ruled in 2017 that he had engaged in “unjust enrichment” in dealing with a New York doctor in the purchase, repair and restoration of more than a dozen vintage motorcycles. Henke was ordered to return the motorcycles and pay what now is nearly $300,000.

Dr. Dominck Cannavo then filed a complaint with the Antique Motorcycle Club of America and, using the civil judgment as leverage, asked that Henke be expelled from the club. It was during this period that the Sheridan family decided to reject a $65,000 offer from Henke for the FL. Within weeks, the AMCA did just that, ousted Henke, who held the post of president of the Hudson Valley chapter of the AMCA.

Since 2010, RIDE-CT & RIDE-NewEngland has been reporting about motorcycling in New England and portions of New York.
Previous Eats: Third Time Lucky At Ozzie’s
Next Non-Sportbike Track Day Boosts Skills