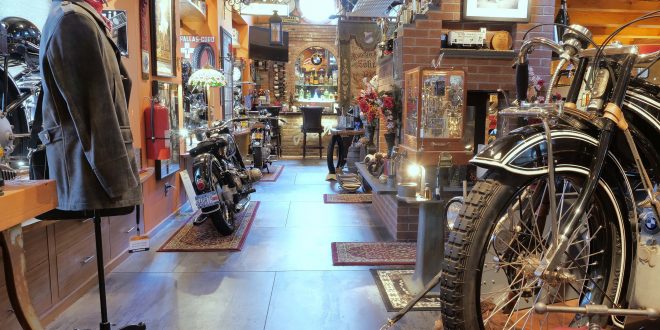 HUNTINGTON, NY – It’s a clever, playfully misleading tale that Peter Nettesheim invariably tells when taking visitors on a tour of his private BMW motorcycle museum on Long Island. Standing next to a 1923 BMW R32 model, the oldest known BMW in existence, he’ll recount that the German company wasn’t allowed to build motorcycles in the aftermath of World War II.

He’ll ask his visitors if they know when bike production resumed; the correct answer being 1948 when BMW came out with the R24 model. It is at this moment that he’ll casually disclose that he owns a “1946 BMW” and that it is parked within eyesight. The revelation inevitably dumbfounds them.

Nettesheim will then recall that Germany was devastated by the war, so BMW’s immediate role was to make “products that the people needed… And what did they make? They made cooking pots.”

Yes, tucked on a shelf in a corner to the right of the R32 are BMW-made cooking pots.

Nettesheim’s story is one of many involving BMW’s history that visitors get to hear when taking a tour. But few folks get the opportunity. Nettesheim’s museum isn’t open to the public. It’s an add-on to his house in a quiet residential neighborhood and accessible only by invitation. RIDE-CT first visited and wrote about it in late 2014, but returned last fall and again earlier this month.

Since that first visit, Nettesheim has built a three-story addition to the existing gallery. The museum now totals 12,500 square feet. He got it by the local zoning board by declaring it to be an art gallery. It features a bar with a beer tap made from a boxer engine and a fireplace with casual seating. Sensory overload and numerical confusion – thanks to BMW’s modeling system  – are common reactions when visiting.

Wherever one looks there’s something of interest. There’s a 1929 R11, a 1935 R35, a 1959 R26 and 1942 R75M military model. The R75M is shown in a wartime setting, complete with a German soldier mannequin and on-demand battlefield smoke. But the museum isn’t limited to motorcycles. Hanging on one wall is a frame filled with period ads from a 1924 German newspaper. Shining down from above are brass spotlights from the 1939 New York World’s Fair.

Missing during that first visit was the aforementioned R32 motorcycle, the 22nd example which came off the assembly line in November 1923. The 21 units that preceded it no longer exist. It was on loan to the BMW Museum in Munich in 2014, but is now back resting atop a bench, tools neatly arranged beneath it.

Nettesheim’s collection is filled with more than 100 classic and modern BMW motorcycles as well as some BMW cars, including a few BMW Isetta microcars. “Basically, I have all of the rare models. I have every model from 1923 up until 1970, and then after 1970 I have another 35 or so more,” said Nettesheim, referring to his motorcycles.

Nettesheim, who owns a Freightliner truck dealership, has been collecting BMWs for more than four decades. “I’m a restorer, I’m a machinist and I’m a mechanic by hobby. That’s my real passion,” he said, explaining that his collection began not because of a love of motorcycle riding, rather because of “a tremendous passion for engineering and machinery. In BMW, I see the best machining.”

The origin of the collection can be traced to his youth. “My dad was a Mercedes Benz car collector and I grew up in that atmosphere, working with him on Mercedes-Benz cars and I really enjoyed the mechanical aspect of it,” he said.

Nettesheim switched to BMW because it’s a sportier brand. BMW cars gave way to BMW motorcycles because they required less garage space and less cash. “When you restore a motorcycle the turnaround time is much less from beginning to finished product and it’s all mechanical, unlike cars where you have a lot of trim work, which never really excited me,” he said. “You could always find a place to store a motorcycle when you’re done.”

The first BMW in Nettesheim’s collection was a 1951 R51/3, the company’s second post-World War II model. A customer was shopping for a truck and offered to trade Nettesheim the motorcycle as part of the transaction. “It didn’t look like this when I got it, but it was perfect for me because it required a restoration,” he said.

The R51/3 now looks flawless. While giving a tour to some other visitors earlier this month, Nettesheim called it “the prettiest BMW” the company ever made.

Among the rarest bikes in his collection are the R16s. He described it as “an expensive sport bike” of its era. “That bike you don’t see at all today really and I have three of them in my collection, and there’s probably about 15 of them in the world that run properly,” he said.

A majority of the bikes in Nettesheim’s collection run and get ridden. Among the recent models are a 2020 BMW R Nine T Pure and an NMOTO Nostalgia model cruiser, a custom which the builder in Miami says “was inspired by the BMW R7 pre-war prototype.”

In-between the old and the new, are other BMWs. Hanging on the wall in the sub-ground level of the three-story gallery are a red and yellow 1990 K1 and a 1983 R65LS. “I do have at least 50 of these motorcycles registered and on the road typically at any point in time,” Nettesheim said.

While he doesn’t ride long distances much because of work commitments, he said, “I don’t want to give the impression that I don’t ride. I ride all the time, even through the winter. I’m always on a bike but, quite frankly, most of the time it’s testing it.”

An award-winning print and broadcast journalist, Bud Wilkinson writes the "RIDE-CT" motorcycle column and the "My Ride" vintage car feature for the "Republican-American" newspaper in Waterbury, CT. He studied journalism at Ohio Wesleyan University where he received a B.A. degree. He currently rides a 1987 BMW R 80 RT and a 2014 Triumph Bonneville.
Previous Changes For Year Two Of Ride 1 Rally At Lime Rock
Next Readers Prefer Greenway Bypass Thomaston Dam