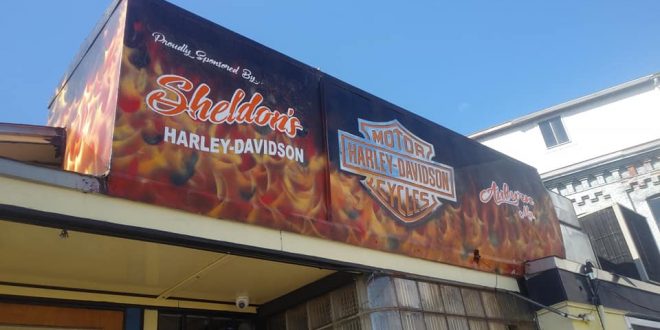 WORCESTER, MA – Artist Tony Freitas waited until a decent day in late April to pull out his ladder and paints to alter a mural on the Miss Worcester Diner here that had riled Harley-Davidson.

The hand-painted mural, which displayed the motorcycle maker’s bar and shield logo, now also exhibits a sponsor name; that of Sheldon’s Harley-Davidson in nearby Auburn, MA.

“Every job poses a problem, challenges,” Freitas said Sunday afternoon. “The challenge here was painting without ruining the background. If I didn’t get it right the first time, I’d have to repaint the flames.”

The letter continued, “While Harley-Davidson appreciates your enthusiasm for the brand, I hope you can understand that we must be diligent in protecting our trademark rights, including the policing of unauthorized use.”

The situation resolved itself within a few days, though, when Sheldon’s Harley-Davidson stepped up to sponsor the mural, essentially changing it from a piece of art into a commercial billboard.

That move satisfied Harley-Davidson, which, according to Freitas, requested that the modification of the mural be done by mid-April. Lousy weather and the COVID-19 pandemic delayed the job and it wasn’t until April 25 that Freitas was to tackle it.

“It always looks easier than it really is. When you’re up on a ladder, it’s never as easy as it looks,” he said.

Hello! If you enjoyed this story, please click on the social media buttons below and share it.

An award-winning print and broadcast journalist, Bud Wilkinson writes the "RIDE-CT" motorcycle column and the "My Ride" vintage car feature for the "Republican-American" newspaper in Waterbury, CT. He studied journalism at Ohio Wesleyan University where he received a B.A. degree. He currently rides a 1987 BMW R 80 RT and a 2014 Triumph Bonneville.
Previous Readers Split On BMW R 18; New Poll On Americade, Laconia
Next Safe Riding: COVID-19 Cripples CONREP